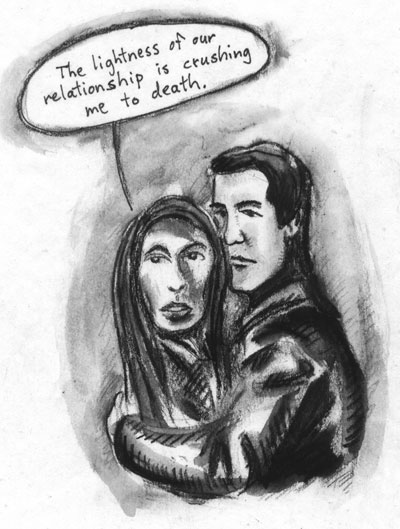 Getting ready for the Rascals event at the WISE (Welsh-Irish-Scottish-English) Hall, I remember trying to figure out what to wear—naturally I wanted to look attractive, but it was winter and I was taking the bus. Winter in Vancouver means rain and taking the bus includes standing at the side of the road waiting, and what a woman wears to wait, in the dark, at the side of the road, in my mind, for myself, should not attract attention, but yet, I wanted to be attractive at the event.

Caught as I was in the logistics of such deliberations, I neglected to consider other factors—aspects of the event that became obvious after I’d checked the bulky Thinsulate (R) duffel coat I’d been wearing since 1979 and finished dealing with my hair in the restroom mirror (regardless of whether it was my own hair in an up-do or the blonde wig, it would have needed attending to). I was wearing a black cashmere sweater with a keyhole feature in the neckline that only vaguely hinted at anything remotely approaching risqué. My black skirt was swingy and loose, as opposed to sexy and tight. Yes, my black boots were knee high, but modestly low-heeled. The overall impression was neither here nor there. I would have fit in at a parent-teacher meeting or a chamber music recital—or some sort of orthopedic version of a 1950s sock hop where kids with leg braces had a chance to cut the rug.

Being or not being attractive in conventional terms had little to do with what was going on at the WISE Hall that night. The room had various stations, much like an indoor carnival with its dunk tank and the test your strength hammer game, but rather than testing the skill of a punter against the physics of a game fraudulently demonstrated by a shifty midway carnie, Rascals’ apparatus was the manifestation of dynamics between participants on opposing sides of power exchanges.

Opposing sides doesn’t actually express the complexity of the arrangement between consenting partners where no doesn’t always mean no. A safe word stands in for no so that no itself can be used to heighten psychosexual experience. If that’s what one wants to explore. So, one could ostensibly overhear someone tied to a flogging station yell out garbanzo bean. Wait. That’s two words.

The equipment itself was innocuous enough; simple metal infrastructure used to facilitate restraint and punishment. A whipping post, a spanking station (with stocks) and a padded table for wax dripping. I mean, who wants to lie on a hard wooden table while they’re slowly being covered in hot wax, drip by painful drip?