To call Superchunk drummer Jon Wurster “Superchunk drummer Jon Wurster,” while true, is a bit limiting. He also keeps time full-time (and tours constantly) with Bob Mould and the Mountain Goats, contributes hilarity to The Best Show On WFMU With Tom Scharpling and maintains one of the most reliably funny Twitter feeds. Superchunk is on the road supporting its 10th LP, I Hate Music (Merge); while traveling from gigs to home and to more gigs, Wurster filled some rare empty space in his hectic schedule by guest editing magnetmagazine.com this week. Read our brand-new Q&A with him. 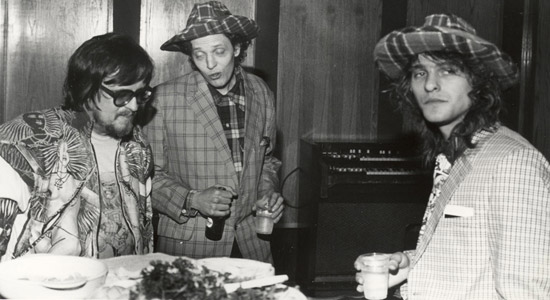 Wurster: My friend Dewitt Burton once described it as “the holy trinity for guys like us.” This trinity consists of Hüsker Dü, R.E.M. and the Replacements. I’ve written elsewhere about R.E.M., and my love for Hüsker Dü should be evident to anyone who’s seen me singing at the top of my lungs when I drum with the mighty Bob Mould. So let’s turn our attention to the Replacements.

I should mention that the title of the new Superchunk LP, I Hate Music, is not a reference to the Replacements song of the same name. It’s in the first line of the album’s first single, “Me & You & Jackie Mittoo.” But that doesn’t mean we’re not Mats fans. I certainly am.

I first heard the Replacements in early 1983 while listening to WXPN, the University of Pennsylvania’s student radio station. The song was “God Damn Job” from the band’s 1982 EP, Stink. It honestly didn’t make much of an impression on me. Something about the paint-by-numbers punk sound and lyrics rang a little false to me (an opinion Replacements singer/guitarist/songwriter Paul Westerberg would echo years later regarding that era of the band). But that would all change a few months on as I sat with Dead Milkmen guitarist Joe Genero in his room on the outskirts of Philadelphia and he cued up the Replacements then-current LP, Hootenanny. The ramshackle title track and Stink holdover “Run It” blew past me, but when the opening descending chords of “Color Me Impressed” started, I got a shiver up my spine. I remember saying to myself when it was over, “Wow, that is a song.” I was a Replacements fan from that moment on, and “Color Me Impressed” remains one of my favorite songs of all time.

I was too young to see the Replacements in clubs (they didn’t play many all-ages shows like Hüsker Dü and R.E.M.), so I had to make do with their records. Let It Be (1984) rarely left my boombox as I drove around southeast Pennsylvania doing my delivery job. That record and Hootenanny struck the perfect balance between rowdy rave-ups like “Hayday,” “Favorite Thing” and “Gary’s Got A Boner” and deeper, heartfelt songs like “Unsatisfied,” “Sixteen Blue” and “Within Your Reach.”

By the time the Replacements appeared on Saturday Night Live on Jan. 18, 1986, I was playing drums in a Philadelphia band called Psychotic Norman. We were excited to see the Replacements on national TV, but the episode was pre-empted by a telethon so we never got to witness the band’s blistering performance as it occurred.

A week and a half later, I showed up for practice at our bassist’s house. So did our guitarist and our singer. Unfortunately, our bassist was nowhere to be found. “I think I heard him say something about going to New York to see the Replacements,” said our guitarist. He never did show. I went home annoyed, and that night I decided to take up a recent offer to audition for a Winston-Salem, N.C., band that needed a drummer. Turns out the group I was auditioning for, a roots-rock band called the Right Profile, was managed by the same people who managed the Replacements. After a few days of playing together, we piled into a car and drove a couple hours to see the Mats at a roller rink in Raleigh. On the way to the show I realized I’d passed the audition. What a great way to celebrate, huh?

That night, the Replacements were truly incredible … for 35 minutes. They opened with “Takin’ A Ride” and blasted through “Color Me Impressed” and “Bastards Of Young” before hitting some of their poppier numbers like “I Will Dare” and “Kiss Me On The Bus.” Maybe it was hard to follow up the sublime, slow-burning “Answering Machine,” or maybe it was just a case of the Sunday blahs. Whatever it was, the momentum changed and the rest of the night saw the band turning in a good but somewhat perfunctory set of fast and loud songs from their earlier records and a handful of covers (they ended with a Bob Stinson-sung “Takin’ Care Of Business”). That’s not to say the Replacements’ fighting spirit was AWOL that night. When a hardcore kid yelled out for “Fuck School,” Westerberg deadpanned, “If we play it, will you leave?” They didn’t play it, and the kid probably left anyway.

I didn’t get to see the Replacements on the tour for their next album, 1987’s Pleased To Meet Me, because the Right Profile was making our (eventually aborted) debut album for Arista Records. We ended up recording it with the legendary Jim Dickinson in the very same room at Memphis’s Ardent Studios where he produced Please To Meet Me. It was hard not to soak up the Replacements’ vibe while we worked. We stayed in the same Holiday Inn that inspired the “Lights that flash in the evening/Through a crack in the drapes” line on “Can’t Hardly Wait.” I think I even used the same drum kit Chris Mars used. Dickinson definitely hooked the same six-foot piece of industrial cardboard tubing to my bass drum that he attached to Mars’ in an effort to make us “really think about what your right foot is doing.”

Dickinson was full of good stories about those Pleased To Meet Me sessions: They ended up with a quieter than expected version of “Can’t Hardly Wait” because Paul was too hungover to tolerate a loud guitar sound; the band laughed at Dickinson when he suggested using a click track; Mars unexpectedly yelled the haunting, final “ledge!” as they recorded the master track of “The Ledge”; unsightly stains near the ceiling of the vocal booth were a result of the Mats vomiting into their hands and then wiping them on the walls. (Some of these stories will no doubt be confirmed or debunked in Bob Mehr’s upcoming definitive Replacements biography, Trouble Boys.) Dickinson really loved the Replacements. He recognized them as being the real deal, and he loved recounting things they said in his approximation of a thick Minnesotan accent: “I gotta boil these bass strings so I don’t looose my tohne.”

I was lucky to see the Replacements three more times before they broke up. Twice on the Don’t Tell A Soul tour in 1989 and once in 1991 when they were promoting their swan song, All Shook Down. All three shows were great. Sure, they were more professional than when I saw them in ’86, but that didn’t mean they’d lost their edge. The albums they were promoting were more polished than their earlier records, but onstage they erased any doubts that they were still a loud, irreverent rock ’n’ roll band.

One reply on “From The Desk Of Jon Wurster: The Replacements”