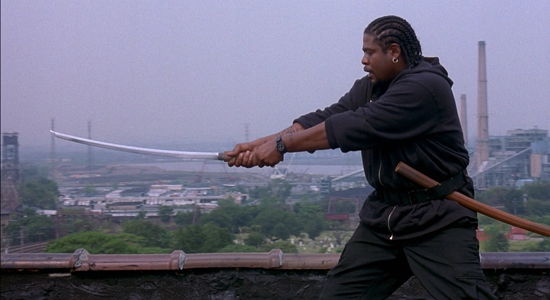 The body of moving pictures directed by Jim Jarmusch is occasionally criticized as being too slow-paced by those not blessed with the gift of patience. They should realize that a movie needn’t be overloaded with murder and fiery car explosions, even one whose principal characters are a less than menacing mafia family—and their freelance paid assassin.

The shadowy man who goes by the name of Ghost Dog (Forest Whitaker with long, braided hair) has received a message by carrier pigeon and prepares for another assignment from a superior he’s met only once. He returns the pigeon to a coop on the roof of his building and enters the ramshackle adjoining office. After selecting a pistol and silencer for tonight’s mission, he sits down to contemplate passages from Hagakare: The Book Of The Samurai. “One should meditate daily on being ripped apart by arrows, rifles, spears and swords.” Another point heavily stressed by the book is loyalty to one’s employer. Ghost Dog works for a man named Louie who once saved his life.

In another part of town, the phone rings in the apartment of Handsome Frank (Richard Portnow). “Listen, Frank, rule number one is you don’t fuck around with the boss’s daughter,” says a warning voice. “She’s been in and out of hospitals for psychiatric evaluation, and she’s a fuckin’ wacko.” “Don’t break my balls, Uncle Joe,” replies Frank testily. “You’re gonna get clipped,” insists Uncle Joe. “Well, I’m not fuckin’ dead yet!” says Frank as a young girl reads a book and drinks white wine on his sofa while a Betty Boop cartoon plays on TV.

Sonny Valerio, the right-hand man of local mafia chief Ray Vargo, excuses himself from the dinner table to speak with Louie Bonacelli about a pressing matter. “So, Louie, it’s gonna go down tonight?” inquires Sonny (Cliff Gorman). “Yeah, I’m using my special guy,” says Louie (John Tormey). “What about the girl?” asks Sonny. “Mornini says he put her on the bus to the seashore,” Louie replies. “I don’t feel good about it, though. Handsome Frank is a made guy, a good soldier.” “Forget about it!” says Sonny. “Handsome Frank fucked up. You can pay your respects at the funeral with the rest of us.”

Without a sound, a hooded black man wearing white gloves parts the living-room curtains just as a red laser dot appears on Handsome Frank’s tank-top undershirt. “What the fuck! What do you want, my Rolex?” Frank asks before two bullets enter his chest and a third goes into his forehead. Unaware the girl would be there, Ghost Dog notices the Rashomon paperback she’s dropped on the floor. “Ancient Japan was a pretty strange place,” says an emotionless Louise Vargo (Tricia Vessey). “It’s a really good book. You can have it. I’m finished with it.”