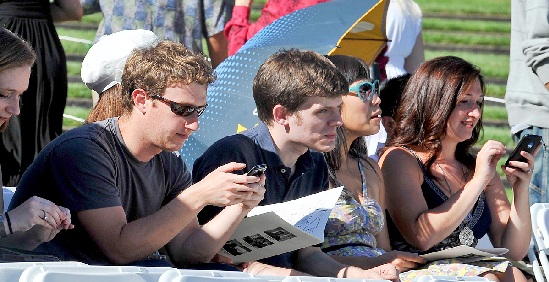 Is it a good thing that I can’t help but see the orphaned press-on nail—floating like a coral flower petal in the black puddle next to the rails while I’m waiting for the train? Or that I can’t stop myself from counting the pubic hairs on my stall floor in public toilets?

I spend a lot of time in airports, and I can be sitting there with a few hundred other cursed travelers at one of those hellish multi-gate cul de sacs at the end of a concourse—and, as I look around, I can’t help but notice that that’s just it: I’m the only one looking around.

Do you see that toddler over there aggressively licking his way along the length of the laminated Starbucks counter—like some Jackson Pollock of saliva—as his parents creep along in line to order their Americanos while they’re both glued to their separate iPhones?

Did you see the dead goldfinch on the sidewalk on Milwaukee Avenue, bright vibrant yellow and black, with ants in its eyes and sharp toenails curled in stiff circles? No one else did—until I stopped and said “aw man, sorry little buddy” and then the eyes of 20 other passersby suddenly focused on the urban memento mori and the air seemed to still. I felt compelled to apologize for bumming everyone out “uh, sorry”, and we all walked on.

I was raised on Quincy, Cannon, The Night-Stalker, Barnaby Jones, Columbo and The Rockford Files. Nancy Drew mysteries? I’ve read ’em all. Ditto, Joseph Wambaugh cop novels. I can tell you where Waldo is in seconds flat. I was led by example to look for clues. I know there are a million CSI shows on modern television, and I’ve never seen those shows, but they must be breeding a new crop of noticers out there, right? Right?

Did you see how that young business guy in the wrinkled french blue shirt kept wrapping the end of his gum around his index finger and stretching it wa-a-ay out of his mouth between his teeth over and over while he was reading his flying dragon fantasy novel on the bus? Like he was pulling taffy. Concentrating. No one else on the over-crowded bus was looking. No one.

I also spend a lot of my life in hotels. Last night in this fancy hotel room I watched a nickel-sized spider spin a web outside my window on the 19th floor. I saw where the housekeeping crew missed two oily circular stains on a high bathroom shelf—a former guest’s bath oil bottle? Or something more provocative? A former guest’s lube tube? There were vestiges of blue painter’s tape on the outlet where I plugged in my computer. A three-inch screw has pulled loose out of the drywall where the blind pull connects to the windowsill.

In the interest of full disclosure, I gotta tell y’all that I never turn on my television in hotel rooms. I know I’m a weirdo. Every new hotel room feels like a crime scene to me. Some people might say a screw has come loose in my drywall.

I know that keeping yourself isolated is a means of protection in a densely populated situation. I know that eye contact brings the freaks, and I know that sealing yourself off is a way of having privacy in the Day Of The Locust atmospheres of public transportation and airport terminals. But I gotta tell you that you’re missing some juicy stuff out there, people. Disturbing things. Touching things. Real things. Human things. Things that have to do with being alive. Spin the wheel. Look up.

Next time you’re on the bus, you could be looking down, reading a story about Beyonce on Huffington Post. Or you could be looking around and noticing how that one older Asian lady in the pink Vegas hoodie keeps absently touching the skin tags on her neck, one by one, like she’s taking inventory. She’s wearing clear plastic sandals and little sparkly star-shaped stud earrings. She looks like she’s trying not to cry. And she’s looking down. At her phone.