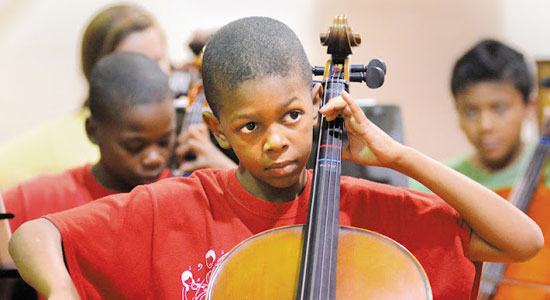 Stamey: Let’s go back in time here, to 1975, when Jose Antonio Abreu, a Venuzuelan composer, conductor and economist, launched a revolutionary music-education program, with the goal of putting classical instruments into the hands of impoverished kids. His innovative program was a runaway success and has today taught more than 800,000 Venuzuelan kids not only how to play, but how to work together—in an orchestra and in life—and given them membership in a community based on mutual respect and the rewards of dedication and accomplishment. And the El Sistema program has spread internationally now, to great acclaim. Even though the goal of the program is not specifically to create professional musicians but is instead to expose less privileged kids to pride and values that can have wide-ranging effects in their future lives, there are superb pros who have passed through the program, including the young conductor of the Los Angeles Philharmonic, Gustavo Dudamel. Here in Durham, N.C., we have one of the most lauded examples of the American implementation of this: KidzNotes, which is run by Katie Wyatt, has in just three years made a real impact in the poorest neighborhoods of East Durham and is on a track to add other cities to their reach. Wyatt is a superb violist, but she is even better at conveying her passion for the real change this system can make. My friends and I were able to study music theory and composition in high school, but even back then that was the exception instead of the rule, based on one remarkable teacher, and the arts programs are typically the first out the door when budget cuts are made. Being able to put instruments into young hands and skills into young, developing minds this way is fantastic. My friends and I have done a few benefits for these programs, and I’d urge any of you, who are in the position to help, to do so. Especially if you have felt a change in your life from playing music, it might be time to help others do the same.

Video After the Jump.