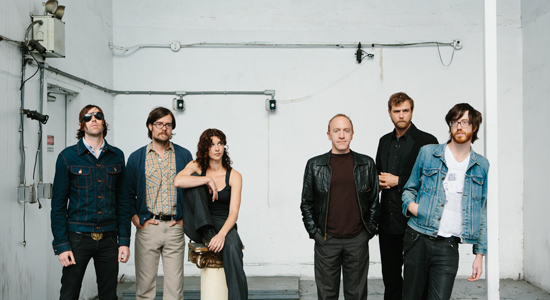 The Silver Gymnasium is Okkervil River’s best album so far. It marks a return to expansive conceptual works like Black Sheep Boy and The Stage Names, but is richer and deeper thanks to the master songwriting of main man Will Sheff. MAGNET’s Phil Sheridan caught up with Sheff by phone from Austin, Texas.

Congratulations on being chosen as MAGNET’s number-one album of 2013. You’ve said this LP was really personal for you, so that must be especially gratifying.
It really is. This record, for whatever reason, was a deeply important record to me. The autobiographical part of it did not come first. I think the sense of urgency and of personal connection came way before the autobiographical component came in. So yeah, it’s always a little bit odd to put yourself out there like that, but it’s also gratifying when people connect to it in such a way.

In an increasingly ADD culture, you’re creating in-depth projects that reward, even demand careful and deep attention. Is that frustrating? Challenging? Irrelevant?
I think, growing into yourself, you just realize that this is what you do. I kind of hit a point with music in my life where I needed to reconfigure what I was doing, on a personal level and on an artistic level. And I think part of that process was coming to terms with who I am—which is that I like to make big, ambitious things. And at a time of real ADD from the standpoint of audiences and people who … I mean, I feel it. You’ll be listening to a song on your iPod and be like, “This is my favorite song,” and then without even meaning to, you just click to get to the next thing. Why are you being so fucking impatient, you know? One of the things I realized is I should do what I want to do. I just felt a real pressure to be real with people. Not pressure, the opposite of pressure: a real comfort in being real with people. I just wanted to do what I do, which is write a big song with a lot of words in a rock ‘n’ roll arrangement. I don’t know, just coming home to something you’ve always been.

You do your writing alone in a basement in Brooklyn. That seems a long way from the full sound of a band based in Austin. How does that process work, and how did producer John Agnello fit in?
Okkervil has always been a fucking super-phenomenal live band. And it’s really difficult to get that on record. I was playing songs for people really early in the process. Likewise, really early in the process, I went down to Texas and rehearsed with just Pat (Pestorius), the bass player, and Cully (Symington), the drummer. And we just hammered away at these songs, trying to make this utterly solid bedrock for the way the grooves were going to work. So, we already had this really solid framework in place. And I knew I wanted a veteran producer. I didn’t want to produce because I wanted to be able to focus on my performance and on our songwriting. And I really admire John. He looks at the whole of a record. He doesn’t get bogged down in the details. I think that’s really important. That’s the way this record was done. I wanted the record to be alive, for it to be breathing, for the band to really shine, for all the great performances everybody had done to jump out of the speakers.

It is fascinating how you start with a relatively simple concept—Tim Hardin’s “Black Sheep Boy” or your tiny hometown in New Hampshire—and wind up with albums’ worth of songs and all the other elements.
I love doing that. I love spinning things out and growing things. What I’m always trying to do is, like, make a world. I’ve always loved that. I love that about a movie, like Star Wars, where there’s a trilogy of movies and action figures and bedsheets and comic books and novelizations. I really think that’s a beautiful and special and wonderful cultural thing. And it goes back to that sense of being comforting, because life is threatening and scary and loud and menacing, and it ends poorly. You never know when something really bad is going to happen out of nowhere to you or to somebody you love. I really think it’s kind of always been a job of the artist to comfort people in some way. What I’m always trying to do is make something people can use, that makes their life a little prettier.

There’s an interactive map of your hometown, Meriden, N.H. You’re working on a short film based on the album. There’s an ’80s-style computer game with 8-bit instrumental versions of the songs. Where does all that energy come from?
I always felt like an artwork should feel like a gift. It should feel like a special thing that you’re giving to the audience because you love them and you admire them and you respect them. I always want something to feel like a sweet, special gift. Every bit of it. Like if you really love someone, you want to give them a gift that has really awesome wrapping paper and a really cool card and a really thoughtful message and a fucking bow that’s tied in a cool way. I want every little detail to feel like we cared. And I really want to make something that’s not disposable. I don’t fully know how to do that. I feel that some level of disposability is out of my hands. It has to do with the habits of listeners, but I wanted to make something that felt really solid and not like something you’d want to throw away.

Several songs mention “best friends”—that’s such a childhood thing.
I became really interested in writing love songs where the love was really friendship instead of romantic love. Because I think that’s a really fascinating topic and over the course of my life, friendship has been equally important to me as romantic love. I think friendship doesn’t have that ability to hurt you and, like, tear your heart open and fuck with your mind that romantic love does. In that way, it’s a lot more pure. So, I wanted to write these really impassioned friendship-love songs. I think there are a lot of pressures in the world—I don’t know if they come from inside or outside—to turn off engagement to the world and kind of go into autopilot a little bit. I think you have to enter into a meaningful relationship with the world and not try to numb yourself and live in this kind of zombified, kind of coasting state. I think there’s something in us that wants to go there, something in me that wants to go there, I think. But when I fight against it, I feel more alive. And I think it’s my job to feel more alive as a person.