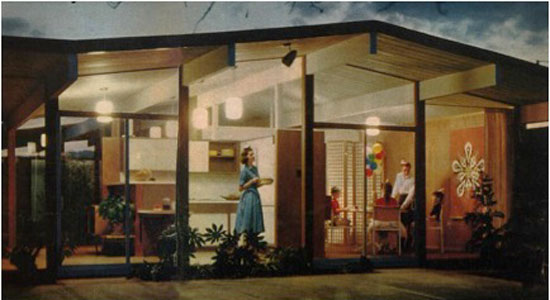 Clapp: I grew up a block from the San Francisco Bay in a flat-roofed, geometric house of the future. It wasn’t some expensive, custom-designed deal. My parents were forward-thinking, but frugal. But there we were, living in a home with an atrium surrounded by walls of glass; a home that looked like a page out of Sunset magazine with radiant heat in the floors.

I never thought it was strange until I was a little older and went to some of my friends houses in different neighborhoods. There I noticed things like pitched, shingled roofs, spiral staircases, drywall and small boxy rooms with tiny windows. I thought, wow, my friends have some really weird houses.

Later, I realized it was me who grew up in a strange house. But I wasn’t the only one. In Northern California, there are approximately 12,000 such homes built from the 1950s through the early 1970s by Joseph Eichler. Eichler wasn’t an architect; he was a businessman who had the luck of living in a Frank Lloyd Wright house in Hillsborough, Calif., for a short while. Awestruck by the feeling of living in an artistically designed space, he had a vision for the post-war housing boom: hire world-class modernistic architects and mass produce cool, California dwellings.

That’s exactly what he did. Hiring architectural firms Anshen + Allen, Jones & Emmons and later on, Claude Oakland, Eichler built post-and-beam houses for the masses. In 1965, my parents bought one of them in one of the state’s first planned communities, the brand new Foster City.

I never forgot the feeling of living in that place—the sense of being outside when you’re in the kitchen, the contiguous living spaces that flowed into one another, and an openness that seems to belong in the Northern California landscape.

Just do a Google image search on “Eichler Homes” and you’ll see what I mean.

When we moved out of that house on Crane Avenue in 1978 and into a hulking two-story home on Marlin Avenue, I felt trapped. The new house was much larger, but I always felt claustrophobic there. It was where I lived until I left for college, but it never really felt like home.

When it came time for Jill and I to buy our first house, we bought an Eichler in Sunnyvale. It’s where we set up our home studio and has become the headquarters of the Orange Peels and Mystery Lawn Music.

There is much more to be said on the topic of building interesting dwellings, but Joseph Eichler created one of the first and best models of just how to do this, and he did it 50 years ago. Doesn’t it seem like it’s time for Kaufman and Broad to pick up on this and stop building fake Tuscan Villas and pseudo Mediterranean Taco Bells?