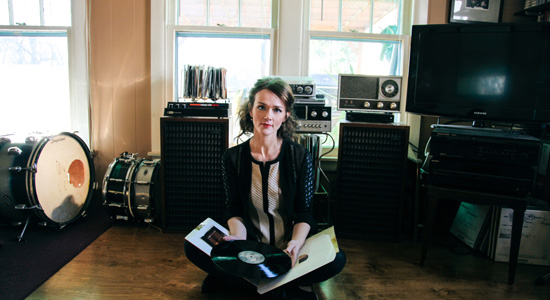 Laura Cantrell was born and raised in Nashville, and even though she was surrounded by country music, she never thought about being a singer or songwriter when she was young.

“My dad was from West Tennessee,” she says, “and every Saturday night his family would gather around the radio to listen to The Grand Ole Opry. (The show has been on WSM for 88 years, and features A-list performers from the world of country, bluegrass, folk and gospel music.) It was The Sopranos of his time. Everybody talked about it the next day. He exposed me to George Jones, the Louvin Brothers, and country from the ’30s and ’40s. My mom liked Joan Baez, James Taylor and Johnny Cash, more modern country. I used to see bluegrass bands playing on the street on the way to concerts by the Pretenders and R.E.M. I had Sunday school piano lessons for eight years, but not conservatory-style. I’d play once a year at the church basement recital.”

Cantrell relocated to New York to attend Columbia University before the performing bug bit her. “I was a college-dorm strummer and doing acoustic gigs, mostly covers, before I started writing. I just loved playing. Then I saw Emmylou (Harris). She was a strong singer, not a songwriter, with an incredible band. She was the most popular female in the country for a while and made a big impression. I didn’t think I was an innately great musician, but I saw how she took songs and made them her own. She led me to Lucinda Williams, Guy Clark and other heavyweight writers. I realized I could find things I can sing that would hang together with my originals to make good records. She lit a fire under me and gave me the incentive to write better songs.”

After graduation, Cantrell worked full-time at a bank, hosted a country radio show on WFMU in Jersey City, put together a band, kept writing songs and started making records. She used traditional country songs as a template for compositions of her own that stretched the boundaries of the music and won her a legion of loyal fans. BBC DJ John Peel called Not The Tremblin’ Kind, her 2000 debut, “my favorite record of the last 10 years, possibly my life.” Cantrell made two more albums in the 2000s, balancing well-chosen covers with her original material, but on her new album, No Way There From Here, she presents 11 originals with only one cover.

“While I was promoting Humming By The Flowered Vine in 2005, I got pregnant with my daughter,” she says. “I knew it was going to take time before I could make another album. I did record Kitty Wells Dresses: Songs Of The Queen Of Country Music in the interim, but that was just for fun and almost effortless. I cut old songs I used to sing in my first bar gigs, when I was learning how to play in a band. I made it quickly in Nashville, with a bunch of session players. That got me thinking about the material I’d stockpiled over the past few years while I was raising my daughter. What if I went to Nashville and brought in some pros and let them help flesh out the skeletons of the songs I had?”

No Way There From Here was co-produced with Mark Nevers, who helmed Kitty Wells Dresses. “I got on the phone and talked with Mark about how we’d approach each tune,” says Cantrell. “The songs were a lot more ambitious than the things I’d written before, and I told him I was open to a lot of exploration. His studio is a comfortable, creative place to work. It’s in an old house with wood floors and plaster walls, and has a lovely, live sound, and he knows a lot of great musicians. We dabbled with different keyboard sounds and brought in some woodwinds and brass. Since he’s an engineer, he has a knack for turning the instrumental parts into real voices. It’s his specialty: finding ways to string disparate parts into satisfying arrangements.”

Cantrell had full-band demos she’d made; with Nevers’ help, she used them as a roadmap for creating music that wandered through the world of pop and rock, while staying rooted in country. “The songs may not sound explicitly country to people who don’t listen to country music, but those elements are there,” she says. “We just let ourselves make it up as we went along. If we thought it would be cool to have a horn part, Mark picked up the phone, and half an hour later, we had a great horn player in the studio. It’s one of the best things about recording in Nashville. You can be spontaneous, and it allowed me to be more adventurous than I’d ever been before.”

No Way There is out via Cantrell’s Thrift Shop imprint. “I have a ‘part-time’ job to help pay for my music career that actually takes up 50 hours a week,” she says. “I’m also raising my daughter and touring and promoting myself. I’m really stretched, but you can’t achieve anything if you don’t take risks. I’m optimistic and realistic. I’m not at the age where I can be the next Adele, but I think this is the best album I’ve ever made, and it’s exciting to be in control of the process.