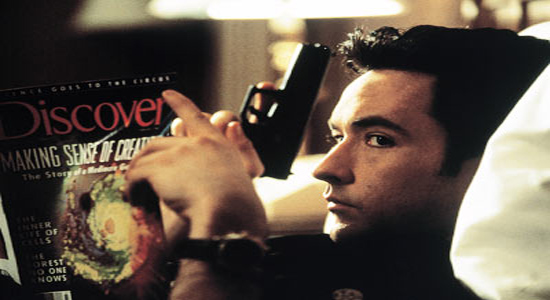 Martin Blank has shown up without an appointment at the office of Dr. Oatman, his psychiatrist. In a scene that foreshadows the confrontational  sessions between Tony Soprano and his shrink, Oatman suggests Martin’s line of work might have something to do with his depression and anxiety. He’s already made it clear he doesn’t want Martin as a patient, since he didn’t get around to mentioning his occupation until his fourth visit. Martin (John Cusack) is a professional contract killer, and Oatman (Alan Arkin) is very uncomfortable.

“I’m not taking notes anymore because I’m afraid of you,” the doctor says. “If you’ve committed a crime, I have to tell the authorities.” Martin replies, “I know the law. But I’m serious about this process—and I know where you live.” Visibly shaken, Oatman says, “Now, see, that wasn’t a very  nice thing to say. That’s a not too subtle form of intimidation. I get filled with anxiety when you talk like that.”

Martin half-smiles and says, “Aw, come on, I was just kidding. I don’t talk about work because I don’t think that necessarily reflects who a person is.” The reason he’s returned, he explains, is that he’s been invited to his 10th high-school reunion in Grosse Pointe, a suburb of Detroit. “I’m conflicted. I don’t have anything in common with those people—or with anyone, really,” he says. “When they talk about what they do, what am I gonna say? ‘I killed the president of Paraguay with a fork?'” What he doesn’t reveal is that he will be in Detroit that weekend anyway, for professional reasons.

Conflicted or not, Martin is drawn to the reunion like a moth to the flame. His first stop is a quick spin by the old high school where he runs into Mrs. Kinetta (Belita Moreno), his former English teacher. “My god, Martin, is that really you, Detroit’s most famous disappearing act?” she asks, extending a hand. “You look great, Mrs. K. Still got that Mary Tyler Moore thing going,” he says. “Oh, thank you, Martin,” she replies. “You were always good at saying that without sounding like a kiss-ass. So, what happened? We all thought Princeton, Harvard. You fooled us all.” He gives the stock answer: “Like Horatio Alger, Davy Crockett, the Donner party, I went west. Are you still inflicting all that horrible Ethan Frome damage?” he asks. “No, that’s been dropped from the curriculum,” she smiles as the class bell rings.

Driving down the main drag, Martin hears the voice he knew he’d run into sometime this weekend. It’s the sultry sound of the drive-time disc jockey for WGPM, “79.5 Radio Free Grosse Pointe.” It’s also the  voice of Debi Newberry (Minnie Driver), the girl he jilted the night of the senior prom, 10 years ago, when he joined the Army.