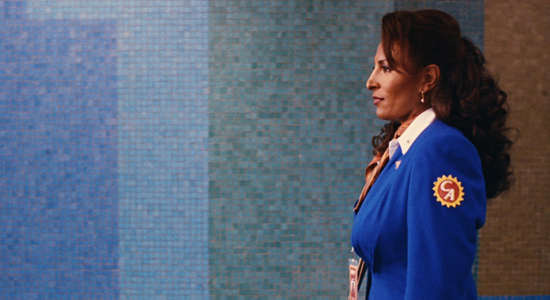 Notorious L.A. gun-runner Ordell Robbie is lounging around the Hermosa Beach, Calif., pad he shares with his surfer-chick girlfriend Melanie Ralston, spinning an advertising video, Chicks Who Love Guns, for ex-prison buddy Louis Fara. “That is a Tec-9, a cheap-ass spray-gun,” says Ordell (Samuel L. Jackson). “They retail for $380. I get ’em for two and sell ’em for eight. ‘This is the most popular gun in American crime.’ Can you believe they’re proud of that?” Fara (Robert De Niro with Aryan Brotherhood-style tats) shrugs silently. The next weapon displayed is the roster’s superstar. “Uh oh, here we go, the AK-47, the best. If you absolutely, positively want to kill every motherfucker in the room, accept no substitutes.”

The phone rings and Ordell says, “Grab that for me, would ya, babe.” Melanie (Bridget Fonda) puts down her cereal bowl and says, “You know it’s for you.” Ordell glares, “Don’t make me put my foot in your ass.” She reluctantly gets off the couch, picks up the phone, says “Hello” and immediately puts it down before anyone can reply. “It’s for you,” she says. As Ordell takes the call, Melanie says to Fara, “He’s no more of a gun expert than I am.”

Ordell’s got a problem with an employee. A kid named Beaumont has been busted for parole violation, in possession of automatic weapons, and faces a 10-year rap. After laying out 10 grand for bail, Ordell decides to call in a favor from Beaumont. But the kid seems reluctant to go. “I’m home, I’m high,” says Beaumont (Chris Brown). “And why are you home?” says Ordell. “I spent $10, 000 to get your ass home. And you can’t help me out!”

To keep some clients in Koreatown in line, Ordell wants Beaumont to hide in his car’s trunk. When the Koreans open it, the kid pops out wielding an automatic, just to scare them. “You’re outta your mind if you think I’m gettin’ in this dirty-ass trunk,” protests Beaumont. “I got a problem with small spaces.” “Well, I got a problem with spending 10 thousand on an ungrateful, peanut-headed nigger. And how small was that jail cell?!” roars Ordell. “You can’t ride up front with me. The surprise element is 90 percent of it!”

Changing tactics, Ordell says, “I tellya what. When we get through with these Koreans, me and you go over to Roscoe’s Chicken & Waffles, on me. Think about it, ‘Scoe’s Special’ smothered in gravy and onions, side of red beans and rice and greens. That’s good eatin.'” Beaumont says “Oww!” when Ordell accidentally closes the trunk on his head, then drives to a secluded spot and opens the trunk again. Beaumont’s high-pitched squawks are cut short by the roar of two slugs from a Smith & Wesson 10 entering his head.