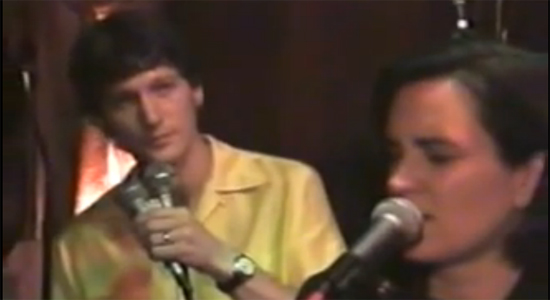 Narducy: In 1999, Chicago jazz musician Patricia Barber was looking for a rock vocalist to sing a duet on her upcoming Blue Note debut live album, to record at Chicago’s The Green Mill. A friend submitted a Verbow record so she could hear my voice. I assume the other 10 rock singers she asked were unavailable because I got the call to do it. I sang “Touch Of Trash” a few times with Patricia one afternoon at her home on the north side of Chicago. She was very business-like. She didn’t offer me a glass of water or anything; she just walked over to the piano and sat down to practice. I think I was there for 20 minutes. She wasn’t rude, just very focused on the work.

The Green Mill, now a legendary jazz concert room, was a hangout for Al Capone and his gang in the 1920s. They built a maze of tunnels and skinny, jagged hallways in the basement during prohibition to confuse raiding authorities and other potential intruders. When I arrived to record the song, I was led to the basement and through many of those old, strange hallways to see the recording equipment set up under the stage. It was amazing to be in that piece of Chicago history.

I was seated in the front row between the president of Blue Note Records, Bruce Lundvall, and Patricia’s manager, Trouz Cuevas. Patricia and her shit-hot band started to play. Intimidated by the level of musicianship, I considered walking out and driving straight home. I was out of my league. Why did I agree to this? How did this happen?

Then it was time for the duet. As if I wasn’t terrified enough, Green Mill owner Dave Jemilo put his very large arm around my shoulder and told me I’d be singing into two microphones: one for the PA, which the audience can hear, and the other straight to tape for the album. I pictured Monterey Pop and other ’60s concerts where two microphones would be taped together, a crude way for live sound engineers at the time to prevent stage volume from bleeding into the vocal mic through phase cancellation. No need for that on this small jazz stage. How should one sing equally into two microphones? I chose the PA mic. You can see how nervous I was in this video. Patricia included the song on her album, Companion, nonetheless.

I’ve never been asked to perform on a jazz record since.