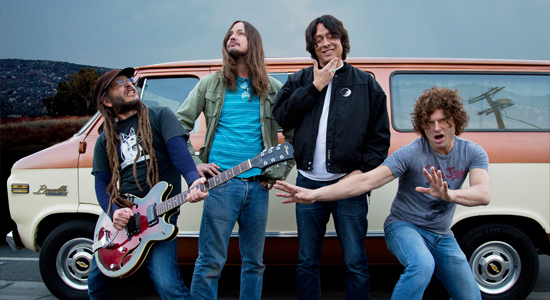 Some artists deal with the subject of mortality in delicate, reflective brushstrokes. OFF! bandleader Keith Morris confronts it roughly the same way a hungry pit bull meets a T-bone steak—with fang-gnashing ferocity. To wit: multiple compressed assaults from the band’s new sophomore salvo, Wasted Years (Vice), such as “Meet Your God,” “No Easy Escape,” “Time’s Not On Your Side,” “I Won’t Be A Casualty” and the 1:10-long kickoff single, “Void You Out,” a treatise on man’s ongoing inhumanity to man. Because, at 58, the Circle Jerks/Black Flag vet (who still maintains a spin-off combo dubbed Flag) has faced his own frailties, overcome most of them, and simply accepted—then soldiered on—with the rest.

The dreadlocked, dry-witted proto-punker didn’t sense the dark theme during the writing and live-to-eight-track recording of Wasted Years. But he admits that he can clearly hear it now. Especially since he was seriously ill for its sessions.

“We’d gone to South America two weeks before we tracked the album,” he says in a laconic drawl, just a few degrees less sneering than his singing voice. “And on the flight coming back, with all these people sneezing and hacking, I picked up some kind of lung infection. So, I’m coughing up phlegm and getting winded halfway through one of these minute-long songs, and there was something ridiculous about that. But I found out I had emphysema.”

Suddenly the exuberant, hyperspeed project OFF! Morris had started in 2009 with Burning Brides guitarist Dimitri Coats, Redd Kross bassist Steven Shane McDonald and Rocket From The Crypt drummer Mario Rubalcaba wasn’t so much fun anymore. But the vocalist persevered, like he had through three recent diabetic comas. The third one last year forced the cancellation of OFF!’s West Coast tour. The first one occurred in Norway, where Morris had flown to play an outdoor festival with Turbonegro. When he touched down, he rehearsed so late that he couldn’t find any open restaurants where he could counteract his insulin shot.

Well, he did find a 7-Eleven near his hotel, Morris amends, taking a Grampa Simpson-lengthy time to relate his yarn. “But they didn’t even have any microwave burritos,” he says. “They had some Norwegian equivalents to pasta and stew, but it all looked like … well, I’ve got a lawn out in front of my place in Los Feliz, and we have this new rash of self-entitled yuppie people walking their dogs, and their dogs shitting on our lawns. That’s what the stuff in the refrigerated showcase looked like—I thought, ‘I’m not eating that because I stepped in that somewhere!’” The hotel maid found him sprawled across the bed, unconscious, and the desk clerk phoned the paramedics.

Morris woke up in a local university hospital, where he stayed for seven days. Which made him even grouchier. “I mean, thank you to the fine citizens of Norway for their socialized medicine,” he says. “But boy, is their food horrible. They tried to serve me shrimp in a tube and this large gray cracker, like a saltine that had been sitting in some cupboard for two years. And my roommate in the hospital said, ‘Hey—are you gonna eat that?’ He got all the food they brought me.” Except the apple juice and candy bars.

But it was the second coma that proved most life-changing. Granted, it was also a tad embarrassing—Morris had just flown home from Australia to have an insulin-leveling dinner with his significant other. “But one thing leads to another, and boyfriend and girlfriend are doing what they normally do, getting all lovey-dovey and squishy and mushy,” he says. “And I pass out after we get through, and in that process, I’m also slipping into a coma.”

His lady called 911, threw open the bedroom drapes. “So, when I come to, the room is brightly lit, I have six dark figures standing over me, and I’m like, ‘OK—I’ve seen the light. Maybe this is that fabled light at the end of the tunnel!’” Now, the rocker checks his blood glucose levels three times a day, eats as healthy as possible and accepts as many outside assignments as he can, like the Gun Club cover he just recorded with Ty Segall and Thee Oh Sees’ John Dwyer for a tribute album.

But Wasted Years doesn’t only view mortality with disdain—it sees the world the same cynical way. “I just write lyrics about whatever affects me, whatever I see, things that I hear,” says Morris. “You turn on the news and it’s just one fucking huge parade of garbage. And that’s what fuels me—that’s what comes through in the lyrics. This world is fucked. And unless you’ve got a good chunk of dough and you’re able to provide for your kids, why would you even brings kids into this world?”