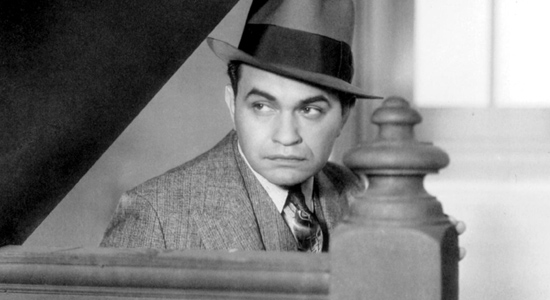 In the days before TV sucked up all the cartoons originally created to precede the main feature at every town’s one-screen movie house, a curious phenomenon had taken place in the animated medium. Whether it was a Bugs Bunny, Popeye or Porky Pig cartoon, every now and then there’d be a cameo appearance by a real movie star of the day, in animated form, of course, and for no apparent reason. Clark Gable would address Scarlett O’Hara or Greta Garbo would spout her most famous line, “I vant to be alone.” Two celluloid gangsters also made the rounds with Jimmy Cagney muttering, “You dirty rat!” The other one was always Edward G. Robinson.

The film that made Robinson was Little Caesar, which opens with shots being fired at a late night filling-station robbery, out in the sticks. With cash in their pockets, the two perps head for the all-night sizzle of the nearest diner for some chow. “What’ll it be, gents?” asks the proprietor/cook. “Spaghetti and coffee for two,” says the nattily dressed little guy, Enrico Bandello (Robinson) who grabs somebody else’s newspaper off the lunch counter.

“‘Underworld pays respects to Diamond Pete Montana,'” says Rico, reading aloud one of the headlines. “What’s that got to do with the price of eggs?” retorts his partner, Joe Massarra (Douglas Fairbanks, Jr). “Plenty!” says Rico. “Diamond Pete Montana doesn’t have to waste his time on cheap gas stations! He’s in the big time. Look at us, just a couple of nobodies.” Massarra fires back, “Is that what you want, a big party? ‘Caesar Enrico Bandello honored by his friends'”?

Making sure he doesn’t spill coffee on his polka-dot bow-tie, Rico turns around and faces his partner. “Sure! When I get in a tight spot, I shoot my way out of it. Shoot first and argue afterwards, I always say! I want to be somebody who looks hard at a bunch of guys and knows they’ll do anything you tell them to do.” Massarra assures his pal, “You’ll get there, Rico.” Out of the blue, Rico proclaims, “Joe, this is the last job in this burg. We’re pulling out tomorrow, heading east, where things break big!”

Rico doesn’t waste any time once they hit Chicago. “I want to run with your mob, if you’ll let me,” he tells Sam Vittori, too busy playing solitaire in the back room of Club Palermo to glance up at the potential new recruit. “You won’t be sorry for letting me in, Mr. Vittori. I’ll shoot straight, and I’ll do anything you say. And I ain’t afraid of nothing!” Vittori finally looks up and says, “So, you think you’re a hard guy, huh? You got an idea you’re good? All right, you stick around. But remember: I’m the boss, and I give all the orders!”