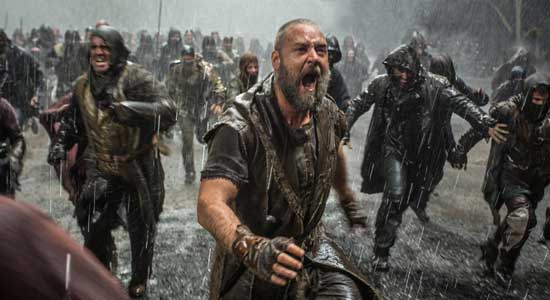 In a moment of post-Oscar desperation, I saw Noah yesterday at the local art house. It was way too long, with a few interesting moments, but not nearly enough to justify spending two-and-a-half hours of your life wading through it. Shot mostly in dim light in Iceland by Darren Aronofsky, it makes the volcanic landscape appear almost alien. I always appreciate Russell Crowe, but he was pretty one-dimensional in this one as Noah. Lots of mud in the face mixed with plenty of snot and sweat from the manual labor necessary to build a boat about the size of a modern cruise ship full of norovirus. That’s in stark contrast to his three young sons whose coifs and facial hair always appear to be freshly barbered. And the ladies, including Noah’s wife (Jennifer Garner), who manage to add touches of runway couture (scarves tossed over bias-cut necklines) to their simple garments. Even the bible-belters will have a tough time swallowing the part where Noah and his family are taken under their collective wing by a couple dozen 30-foot tall “watchers,” who, it says here, were once angels who failed in their mission and were turned into “rock people” by the Big Guy. Nobody utters the Thing’s signature line, “It’s clobbering time!” but who knew God worked for MARVEL comics back then? These protectors are now clumsy (but likable) behemoths who pulverize any of the hordes of bad guys aiming to sabotage Noah’s mission, which he interprets as exterminating the last of the human race, including his family, after saving all the planet’s lovable lower species from the deluge in his wooden ark. I would have re-named the movie Power Trip: It’s Not Easy Being Dad and found a place, maybe, for Adam (the name works here) Sandler to lighten things up just a bit. Wonder if the cool new pope has anything to say about this one. Utterly missable, says I.