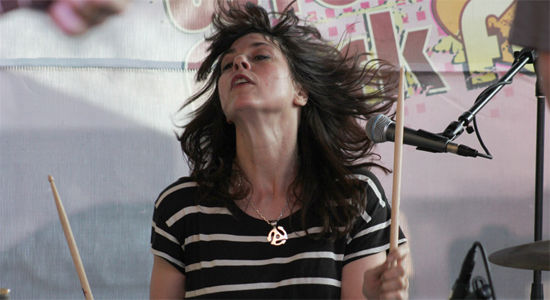 Kantor: I’ve heard a lot of people (mostly drummers) say that your rock band is only as good as your drummer, and I tend to think they’re right. For reasons I can’t quite comprehend, I’ve been very spoiled in this regard. I’m recalling about 20 great drummers whom I’ve been fortunate enough to play with on one or more occasions over the last 16 months or so, and it’s always a very gratifying experience. Continuing this good fortune, my most frequent co-conspirator in the backline in recent years has been Linda Pitmon.

There have been moments when I’ve thought, “I could listen to Linda play all day,” and then there have been days when that’s what I’ve actually done. Linda was the hardest-working musician in Austin this March during SXSW. I lost track of how many times we played together in various lineups down there, and each time was more fun than the time before it. I played more shows than I thought humanly possible that week, and she still outpaced me on that count (and let’s not forget that drumming requires about a thousand times more energy than playing keyboards).

How good is Linda? A friend of mine who’s played with just about everyone under the sun asked me last year what it’s like to be in a band with Clem Burke. “It’s wonderful,” I said, “although he’s playing overseas with Blondie this summer, so we’re getting Linda to sub on a few upcoming shows,” and my friend promptly replied, “Well, that’s an upgrade.” (Keep in mind that Clem is one of rock’s greatest living drummers).

Linda’s playing and preparation keep me sharp, and she always makes her bandmates sound better. I see a lot of what I strive to be as a musician in her approach: She likes to work on the biggest, hardest challenges first, and she’s keenly aware of all the little ways in which playing a supporting role to a T makes a big difference. We’ve developed a knack for giving each other the right professional encouragement at the right time, and she pushes me to put myself out there in ways that I didn’t used to be able to do. Through conversations over meals and long drives, and on stages, and in cheap hotels and green rooms of varying degrees of cleanliness, we’ve become good friends. Someone recently started calling Linda and me “The Wonder Twins.” The nickname hasn’t caught on with the masses yet, but that’s sure to change when we add this octopus-riding-an-ice-unicycle trick to our act on the next tour.