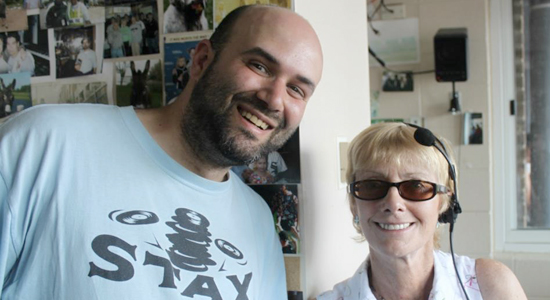 Kantor: During my 12 years as the Fenway Park organist, I’ve done an average of three or four interviews per year on the subject. Over the course of each of these 40-or-so conversations, Nancy Faust’s name has inevitably come up. How could it not?

Nancy played the organ at Chicago White Sox games for 41 years before retiring in 2010 and is the greatest sports organist of all time. As a 23-year-old in 1970, she was the first to incorporate rock and soul songs into sports music repertoire, and she did it flawlessly; the importance of this development can’t be overstated. She drew on the traditions of live music at sporting events to establish the modern musical cues that became standards for celebrating the home team’s players and lightly poking fun at the visiting team’s players and at the umpires. She inspired Hall Of Fame broadcaster Harry Caray’s much-celebrated “Take Me Out To The Ballgame” sing-along tradition, which he later took to Wrigley Field upon joining the Cubs and which still thrives there today (16 years after his passing) with an endless parade of celebrity guest conductors. She invented what we now call “walk-up music”: the theme songs that today’s home-team batters request the DJ to play when they walk up to the plate. Her style provided a perfect amount of whimsy to the baseball soundtrack, and her playing technique always brought the strength of the melody to the forefront so that her songs would be easily recognizable.

In 1977, Nancy decided spontaneously to play the chorus of the hit song “Na Na Hey Hey Kiss Him Goodbye” by Steam when a visiting pitcher left the game due to a poor performance. Fans in the stands sang along enthusiastically, and the White Sox immediately found themselves with a catchy, significant, contemporary theme song. “Na Na Hey Hey” sing-alongs quickly gained international popularity at sporting events around the world, and Steam was suddenly inspired to re-release the record eight years after its initial success. As a result, the single went gold a second time, and Mercury Records sent Nancy a gold record to acknowledge her role in re-popularizing the song.

I attended my first White Sox game in 1986 at age 13. I was completely captivated by Nancy’s playing and knew almost right away what my dream job was. (I didn’t know that I would land my dream job, but I knew what it was.) Nancy was always available to greet fans, and I visited her booth a couple times as a teenager to watch her play and to ask her questions, which she answered with characteristic patience and substance.

In 2003, when I started working for the Red Sox, I nervously called Nancy and asked what advice she could offer me about how to do the job well and how to get the most enjoyment from it. We ended up speaking for half an hour, after which she invited me to visit her home next time I was in Chicago. I promptly booked a trip, and we spent an afternoon playing duets in her living room. She was extraordinarily generous in sharing her vast expertise, and I learned more on that one day than on any other in my life. Among Nancy’s many nuggets of wisdom, she told me that she always kept learning new hit songs and sprinkling them in with the old ones; she implored me to do the same in order to avoid eventually becoming a dinosaur like many of the long-time ballpark organists who had preceded her tenure. I have taken this to heart and have received positive feedback from baseball fans for including modern hits among my selections.

In 2005, when the White Sox beat Boston in the playoffs, I called Nancy to wish her team continued success. She asked me what it had been like to play for the World Series the previous year. While it felt unfair that I should have that experience before she did, given her length of service and superior talent, it was a tremendous honor to share my insights with her, and it brought me joy to see my mentor playing later that month in the White Sox championship parade. As Nancy and I established a friendship (for which I feel extremely fortunate), I could see that she was proud and gratified to pass her knowledge and passion on to me and to others, so that the great traditions that she had spent her career embracing and creating could continue to be actively shared with baseball fans even after her retirement.

Nancy was innovative and inclusive, and her execution was perfect. For any of the numerous reasons listed above, I find her legendary contributions to baseball worth mentioning whenever I’m asked about my own experience, training and influences. The combination of all the aforementioned reasons is what makes Nancy Faust the Picasso of sports organists. Every time I play the organ at a baseball game, my main goal is to try my best in the hopes of eventually being almost as good at it (and almost as friendly) as she is.