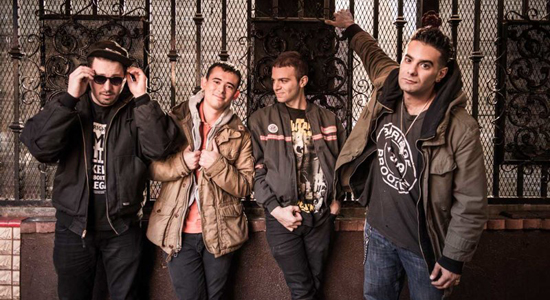 Kantor: I love Paul McCartney, but that didn’t stop me from turning down free tickets to see him when he was playing on the same night as the So So Glos. I discovered this band early last year through the unfortunately soon-to-be-defunct Low Times Podcast, which has been a favorite forum of mine for musician interviews these days (despite my own somewhat underwhelming interview on the show). I was entranced by the band’s humor, their low-key demeanor, the intelligence and insight with which they spoke about their own work and their ability to impersonate a variety of historical Bob Dylan singing styles. They had such a natural give and take that it sounded like they’d known each other for a lifetime. As it turns out, they basically grew up under the same roof and had essentially been a band since they were in kindergarten. I was excited, and a quick survey of some music blogs yielded a handful of fantastic songs they’d released. I raced to thesosoglos.com and sent them a message; the gist of it was, “You don’t know me, but I think you’re great. Best of luck and keep up the good work.” Within hours, they’d replied with something along the lines of, “We know who you are, and we think you’re great, too. Maybe we can do something together some time.” I was floored.

(Quick tangent: I like sending messages to people whose music I like to tell them that I like their music. It’s fun. I don’t expect any replies, but occasionally I get some. The only other reply I ever got of the “I know who you are” variety was from a songwriter named Bridget Kearney; unbeknownst to me, she had worked part-time at Fenway Park selling those novelty-size foam hands in the bleachers, which I gather is how she knew of me. She’s spent the last few years playing upright bass and singing back-up in Lake Street Dive, who recently played on Colbert and also made it onto the LP charts. She’s great.)

A follow-up exchange with the So So Glos revealed that we would both be in Austin for SXSW in a few weeks. We hatched a plan to rendezvous and make something happen. We met minutes before taking the stage together at the Palm Door (I played that room three times and said the name at least 20 times before I got the joke). They’d grown up rooting for the New York Mets and founded a punk club in Brooklyn called Shea Stadium shortly after the original Shea was torn down, so they were keen on playing up a baseball connection for the show. We did ballpark-style player introductions and organ instrumentals in between some of the songs. We had a grand time, and I was blown away by their live show, not to mention the way they dissuade audience members from being more engaged with their phones than with the high-energy rock show they’re attending, and also not to mention the one-of-a-kind spray-paint-and-stencil T-shirts that they were designing at the merch table afterward. Since then we’ve played together twice on my home turf (including an intensely cathartic sold-out Middle East show with Titus Andronicus days after the Boston Marathon bombing) and again at this year’s SXSW for a “free rum and tattoos” party. (I’m sure there were no morning-after regrets for anyone who indulged in that combination.)

I look forward to playing with them in New York sometime. Their life-long relationship with an ever-changing NYC is an important part of who they are, and it informs an ethos in their sound and their message: old-school yet critically vital and contemporary, community-oriented while celebrating individuality, completely aware of people and places and things that are vanishing yet remain ever-present. They are wise beyond their years without sacrificing joyfulness, and they have given me great personal and professional encouragement. Most of the time when I play with other people, I’m the young guy with the most to learn. When I play with the So So Glos, I’m the old guy with the most to learn.

The So So Glos have put out a lot of good songs. Lately, I’m partial to their recent LP, Blowout. You should check it out.