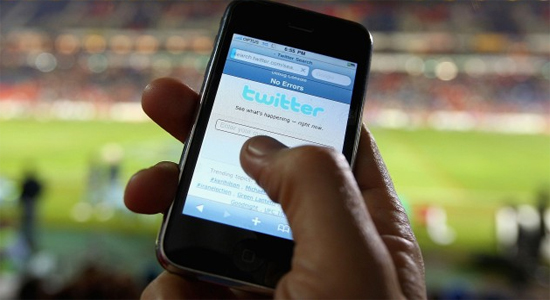 Kantor: I like Twitter. It helps me find people with whom I share similar creative interests. In some cases, those encounters have led to in-person meet-ups and even collaborations.

Twitter is also an effective mechanism for receiving song requests and feedback at the Red Sox games (all my years of working day jobs in libraries have sharpened my Boolean searching skills). At first, I would read the feedback just as a lurker; later, I started replying with a quick “thank you” for comments that were positive, negative or other. Eventually, I began retweeting or sending friendly tongue-in-cheek replies that I thought a wider audience might enjoy (not that my audience is wide, but it’s a nifty niche). I also enjoy occasional playful Twitter exchanges with the Fenway Park DJ. It’s all been fun, and a growing number of people have told me that they now like baseball and the Red Sox as a result. I don’t consider myself to be in the business of trying to convert people, but if that’s a side effect of engaging folks who are curious about what I do, then I’m flattered.

Last year, I started saving some tweets that I especially enjoyed in order to show them to family and friends who aren’t on Twitter and who ask me about my job. I’ve gotten a lot of positive response from that crew, which has been nice. During last year’s World Series, my friend Andy Sapora (of Flying Karamazov Brothers fame) was fond of telling people that he was more entertained by the tweets that I was sharing than by the baseball games.

And so, for (what I hope will be) your amusement, here is part one (of two) of my annotated Top 50 Fenway Organ-Related Tweets of 2013, in no particular order:

I played this once when the Indians came to town (“Hello, Cleveland!”) and have since gotten requests for it.

I do aspire to be one, however. 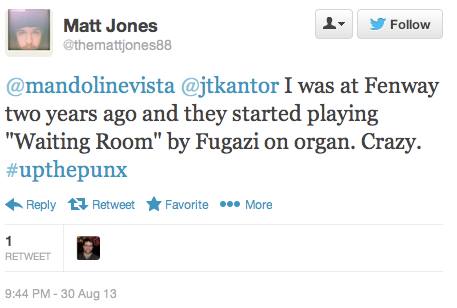 The Fenway DJ likes to play this one when the opposing team’s pitcher and catcher are talking too much. I’ve played it a couple times as well.

One of the advantages of having a music college down the street from the ballpark. 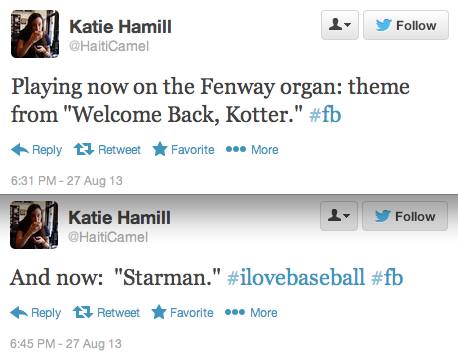 Because it’s pretty much common knowledge that the Sweathogs were big Ziggy Stardust fans, right? 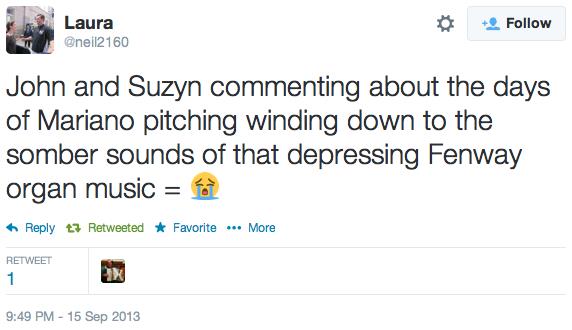 The reviews are in! “Depressing!” 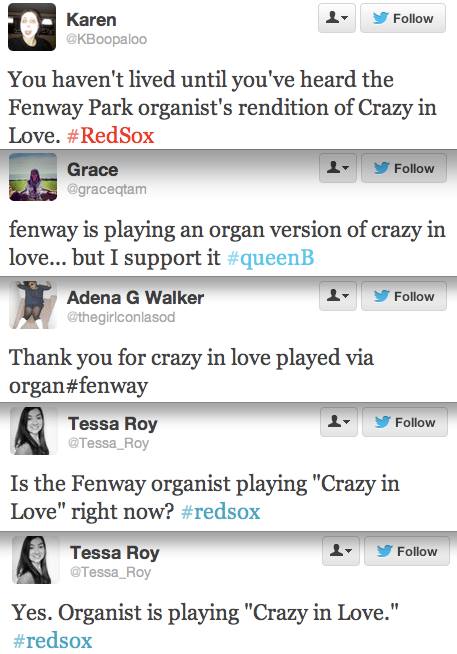 Beyoncé went over well on this particular evening. 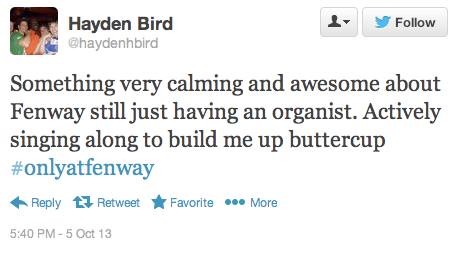 “Calming and awesome” is almost epitaph-worthy. 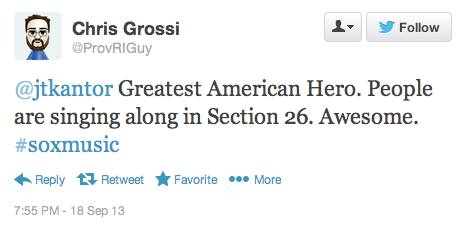 When your section number matches Wade Boggs’ old uniform number, you have to represent. 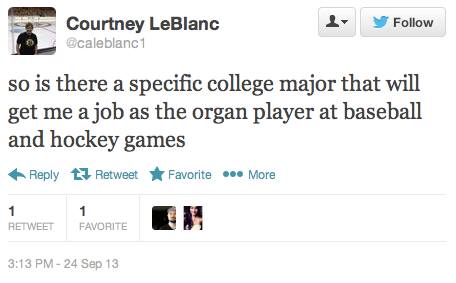 I met this youngster at a recent game and told her that I wasn’t sure how much my Spanish-literature degree helped in this regard. I also gave her a real musical homework assignment so that we can play a duet this summer. 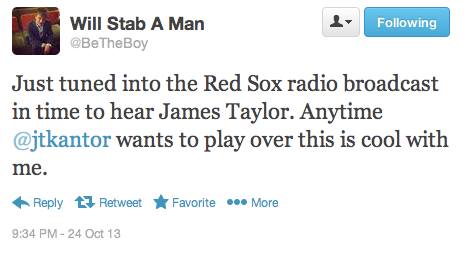 I’m working on trying to get more established opening acts. 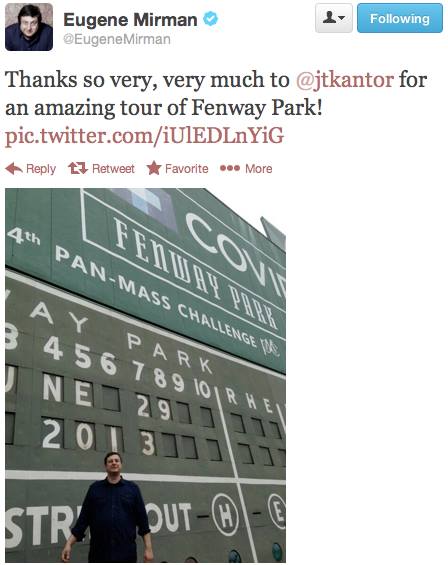 It was a treat to hang out with one of my favorite comedians, though he’s not much of a baseball expert; I couldn’t tell if he was kidding when he pointed to the bases and asked, “What are those white squares for?” 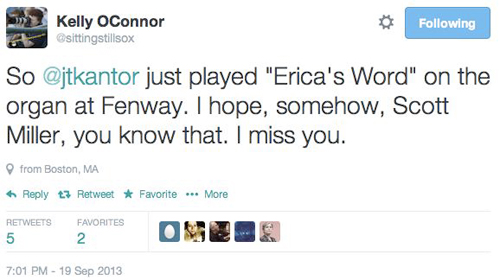 There were a lot of poignant responses to this selection. 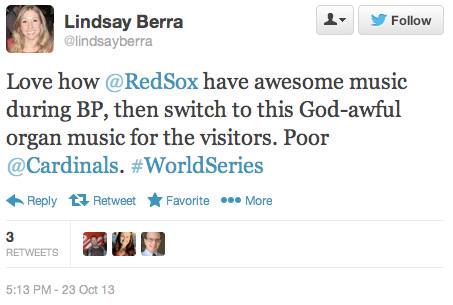 “God-awful!” This one might be my favorite. I asked her to elaborate but got no reply.

This song was everywhere last summer, which I took as a sign that I should learn it.

I found the guy who’s a fan of both the local ballclub and my local band.

If this song isn’t in your “flugelhorn rock” top 10, then I don’t know if we can be friends. 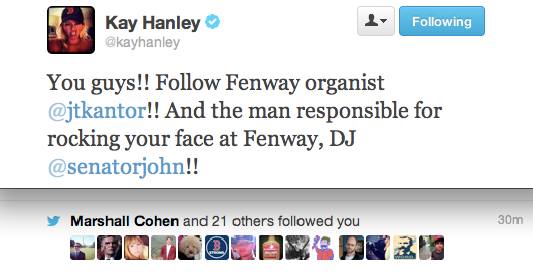 When Red Sox superfan and Letters To Cleo frontwoman Kay Hanley gives you a shoutout, the followers come in droves. 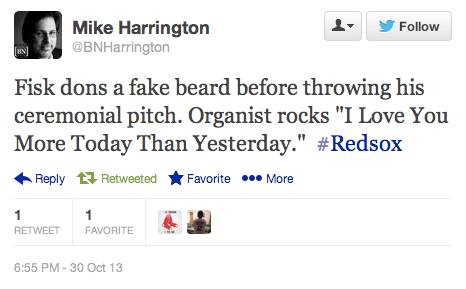 Seems that David St. Hubbins/Lenny Kosnowski is a Big Star fan. This led to a couple of exchanges with Jeopardy über-champion Ken Jennings…

For the 50th anniversary of the “I Have A Dream” speech. 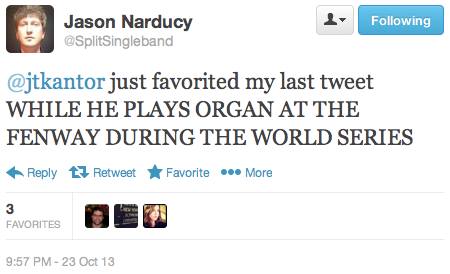 It must have been a really good tweet. Side-note: Jason (no stranger to the pages of this magazine) and I went to high school together in the late ’80s; we barely knew each other back then, but I remember he had a Hüsker Dü shirt … now he plays in Bob Mould’s band.

So do a little living and come to a game at Fenway some time.

Check out part two once it’s up.