Just to prove that our grizzled movie guy Jud Cost doesn’t spend all his time squinting at old Harold Lloyd silents or grimy b&w film noir for our Vintage Movies series, here’s proof that he does watch new movies, too. Not only that, but he’s pretty sure he actually liked this one and maybe wants to recommend it to you. 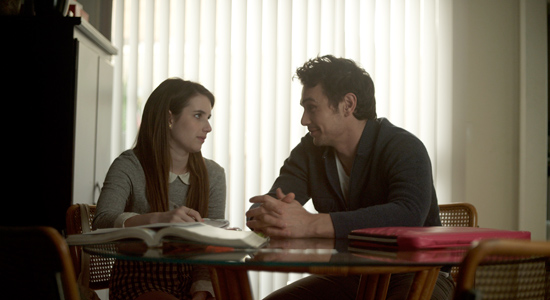 Palo Alto played yesterday at the local art house, and my reaction to it was as confused as the lives of most of the kids depicted in the movie. It’s the newest noble attempt to make the high school film of its time. And, like the characters here, it’s difficult to make up your mind about how well it succeeds. For one thing, these feel like real kids, not just actors. You go through a roller coaster of emotions as you watch “current” teenagers experiencing the same old list of things to do—or not do—mostly at night: sex, drugs, booze, bad parties, smoking, reckless driving, bullying, vandalism. It’s all still there, just dressed a little differently than when you were in school.

April, portrayed by Emma Roberts, is a virgin who plays on the soccer team and trains for her sport by knocking off a pack of coffin nails everyday. Teddy (Jack Kilmer), who thinks he may like April, is basically a decent kid who gets caught in the legal fallout from the seriously bad behavior of his best buddy, Fred (Nat Wolff), a borderline misogynist. The unspectacular way things unfold here brings back the car rides you shouldn’t have accepted with some fucked-up person behind the wheel. Or the marijuana laced with something nasty you shouldn’t have smoked that made you think you were going to die. And that was you who vomited all over the interior of your “new” second-hand VW beetle and then had to stagger out to the driveway at 4 a.m. to hose down the car, inside and out, so your mom wouldn’t see (and smell) the damage when she got up early next morning to read the paper.

One thing is certain about the debut work of 27-year-old director Gia Coppola (granddaughter of the man everybody called “Frankie,” according to a friend who once wrote music for the imposing film director in Marin County). She’s created something that is utterly plotless. Like the way teenage life, itself, comes at you, it’s just a series of random events, some forgettable, some kinda lame and others even worse. James Franco wrote a book of short stories about his home town (Palo Alto) that shaped the movie’s script. But with no specific Palo Alto locales, this could have been shot anywhere. Franco plays Mr. B, a soccer coach who’s becoming attached to April. You root for her not to do it with him, but she succumbs anyway. If you’re looking for something that kinda explains the high school years of the social networking crowd, the same kids you’re always badmouthing for staring into their iPhones instead of talking to one other, this one will help explain things about as well as anything—whatever the hell that means.