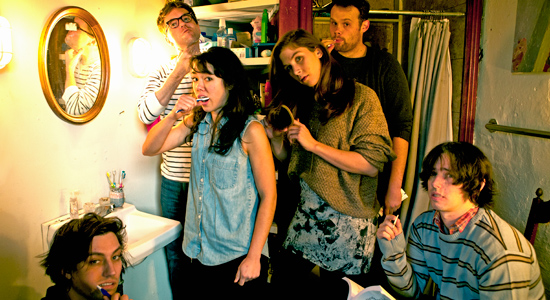 It’s no longer an aberration for artists to collaborate in the cloud, given the ease with which most of the world accesses high-speed internet. And A Sunny Day In Glasgow—collectively based in Philadelphia, Brooklyn and Sydney, Australia—creates the sort of impressionistic guitar pop that feels ripe for working in the ether. But that doesn’t mean the process of writing fine new album Sea When Absent (Lefse) across three cities and two hemispheres was ideal. In fact, the method was so present that it became a centerpiece of its narrative.

Goma adds that much of the lyrical content here is centered on distance, as well as the triumphs and failures associated with telegraphing ideas in the digital age where we can be “simultaneously everywhere and nowhere,” according to the band. “2014 is just an insane time to be alive. Sea When Absent is ASDIG’s story for the milieu, a fever-dream about the now—or maybe a lucid dream about the fever-now—and a future possible … set in pop-major.”

This might scan as art-school drivel were it not for the fact that it’s a remarkably cogent way of describing the sound of Sea When Absent, A Sunny Day In Glasgow’s third official album. (There’s four if you count 2010’s Autumn, Again, a leftovers LP from the Ashes Grammar sessions.) Since ASDIG’s arrival in 2006, when the roster was essentially just chief songwriter Ben Daniels, the band has been praised for its liberal take on shoegaze and synth pop, reconfiguring a sound that isn’t easily made new. That effect was enhanced by the home-recording methods employed on everything ASDIG recorded up until 2011, when the band contracted producer Jeff Zeigler to work in a recording studio for the first time.

Two years and a successful Kickstarter campaign later, Sea When Absent arrives with many of ASDIG’s trademark qualities intact, buttressed significantly by Zeigler and his studio prowess. But it also reveals new shades of the band. Sea When Absent is at turns the heaviest of ASDIG’s oeuvre and its most pop, bringing Goma and Anne Fredrickson’s vocals to the fore and allowing them to stretch in a way that at times recalls, perhaps strangely at first, R&B. The more centrist take on pop experimentation is a great look for the band.

Goma says that, while writing Sea When Absent remotely wasn’t ideal, the group learned its “new language” firmly enough to travel that road again as needed. Still, no matter how fluid our digital communications become, there will always be an advantage to working face-to-face. That, and fervent ASDIG fans might not have to wait so long for the next release. “I think we’d rather make something in 10 days instead of two years,” says Goma.

Pedro The Lion’s David Bazan was prescient on this point more than a decade ago: “Progress has a way of feigning ease.”