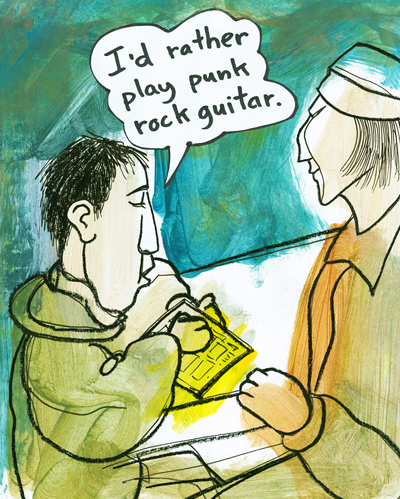 Much of what I do on a daily basis has more to do with re-contextualizing what I’ve previously created than making brand new art. I love finding patterns and connections that occur when I combine aspects of current work with the past—this includes curating Normal History: The Art Of David Lester (which we view as a Mecca Normal collaboration), making videos for songs we recorded in the 1980s or turning interviews into performance pieces.

David and I present a classroom event—most recently, it has been an adaptation of David’s graphic novel The Listener that utilizes our own history to reiterate themes in his book. We use our art, songs and band history as examples of our claim that art and music can change the world.

Both of my recently completed novels feature painters as protagonists. Without planning to do so, I created several series of paintings “by” those characters as they were described in the novels, and when it came time to write new songs, I used text directly out of the novels. We seem to keep finding ways to extend longstanding themes into new disciplines, including the internet.