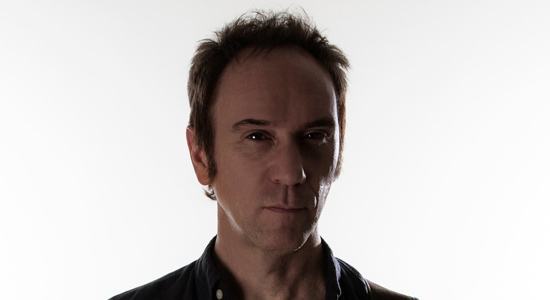 Doug Gillard is known (rightly so) for his guitar wizardry in bands such as Guided By Voices, Cobra Verde, Death Of Samantha and, for the last few years, Nada Surf, but that notoriety sometimes overshadows the fact that he’s an accomplished solo singer/songwriter. With his third LP, Parade On (Nine Mile), Gillard continues to show off his virtuosity—solos like the one on “On Target” are just ridiculous—as well as his knack for catchy, folk-inflected power pop. During some down time in Spain while Nada Surf records new material, Gillard talked about his guitar beginnings, recently joining Guided By Voices onstage and his Nada Surf status. He will be guest editing magnetmagazine.com all week.

MAGNET: You posted a photo on Facebook of yourself playing guitar at age 13 at your brother’s wedding reception. Was that your first public performance? How did it go?
Gillard: No, it wasn’t. When I was seven, I played snare drum at a talent show in the small town of Norwalk, Ohio. I was taking drum lessons, and my instructor’s wife played piano while I performed this recital piece for solo snare drum. It was simple but incorporated some rudiments and rolls. I won second place. A couple years on, I would play guitar at various school events. One time, a sixth-grade reading class held a classroom talent show. I made a backing track at home for a cover of Kiss’ “Calling Dr. Love,” primitively overdubbing rhythm guitar and drums onto two tracks. Unfortunately, what happened was I played the melody live on guitar instead of singing at all. I didn’t win that competition, either.

When did you start playing guitar? When did you realize you were good?
I was about six and had a Sears Fireball plastic guitar. It came with a guitar-tuning Flexi Disc, and I did tune it by ear to standard, but I had no idea how to form regular chords. So I would just open-tune the strings to chords that sounded good or play one-note lines. There will be an entry on these songs in this guest-editor series coming up. I started taking proper lessons in third grade, for about three years.

By the way, my upcoming guest-editor stories are mostly typically indulgent memories of band and touring life. Not a lot of personal interaction stories, but I also don’t believe in the sort of kiss-and-tell writing style, so any personal tales will be positive. Especially lately, I’ve come to realize how incredibly important friendship is, and to have a friend, you have to be a friend. Maybe the stories aren’t very interesting, either, but music is really all I know anything about. I tried to incorporate the ridiculous together with the sublime. I’m not much of a writer, so don’t expect sentences to be constructed in the best way.

I’m sure we’re all going to enjoy them, so don’t worry. Not to make this all about Facebook, but you also recently posted about meeting the late Tommy Ramone a couple of years ago. What was that like?
He appeared at a screening of End Of The Century for a Q&A. I saw Jon Wurster there, and we sat together. Later, I saw Tommy in the lobby, and he was happy to chat a bit. He was a gracious and humble man and was the one who really put that band together. A revelation to me was that he wrote some of those complex song intros with the math-y timing.

You’re busy playing with bands in addition to creating solo material. How difficult is it for you to balance it all? Do you sometimes feel unable to devote enough time to promoting your own efforts? I ask because you’ve put out these really solid solo LPs that deserve more attention.
It’s getting more difficult. Yes, I do feel unable to devote enough time to promote my solo things at times, but I enjoy all of the projects I’m involved in. Thanks for your compliment, and I agree with you.

Parade On‘s first song is the jaunty, catchy yet lyrically dark “Ready For Death.” Are you OK, Doug?
[Laughs] Yes, I’m OK, but that’s a phrase I tend to think at times when I’m feeling fatigued, ill or foggy. I have some thyroid/adrenal issues that give way to a bit of depression at times, but I’m able to work through it. In fact, working gets me through it; then again, the condition makes me procrastinate the work. It’s a vicious cycle. Basically, I took the phrase and juxtaposed it with happy music. “Ready for death” was the starting theme, but as lyrics developed, I found the song isn’t so much about how I’m feeling physically as it is questioning a belief in deity. I thought it would be fun to create a Harrison-esque sound that instead begs the question, “My sweet lord, do you really exist?”

I interviewed Slim Dunlap years ago, and about Bob Stinson’s guitar skills, he said, “He was capable of things that were just not normal.” I thought of that when I heard the solos on “No Perspective” and “On Target.” I don’t really have a question there, just wanted to offer that compliment.
Well, thanks, Matt. Death Of Samantha opened for the Replacements in ’84, and I got to see Bob live. He told me later he liked my playing, too, so I was elated. I think it’s true he did some wild stuff. I’ve always had a thing for taking chances like he and, for instance, Robert Quine did. I try do it in live situations all the time. You shoot for something and you may fail, but you have to try to be chancy. I love seeing others do that, and I think improvisation in rock or punk/indie has all but disappeared. Not so much with drummers, but in the guitar realm for sure.

You recently played a couple of songs with Guided By Voices in New York. How did that go?
It went wonderfully, thanks. I opened for them a few years ago as well. This time I joined them for “Teenage FBI” and “Fair Touching.” The week before, our reunited Death Of Samantha opened two shows for them as well, and that was a blast, too. Cobra Verde and my band Gem opened for GBV in the early ’90s, so we’ve all always been friends through the years with Tobin (Sprout) and Mitch (Mitchell). I was in GBV with Greg Demos as bassist in 1998-99 as well.

How did the Death Of Samantha reunion happen? What are your thoughts on how it went?
We reunited about three years ago now. John (Petkovic) ran into original bassist David James in Cleveland, and they discussed doing the band again. John already knew I was into doing the same. The first reunion show went amazingly well, and we all have so much fun playing as a band. Our double album (If Memory Serves Us Well) came out last year, and we’ve played several shows to support it, with more touring happening sometime in the future.

You’re very active with Nada Surf at this point. In my opinion, you’ve made a fantastic band even better. What has the experience been like?
It’s been really great. I enjoy being in the band because I love being with those guys. We’re all around the same ages, the mood and outlook is always bright, and we share similar influences musically. The touring takes us to some great places, and we have a crew of people who work closely with us in different countries who are now all very close friends of the band. Hell, knowing Ira Elliot got me into Bambi Kino, probably the most fun band I’ve ever been a part of. Plus, I get to be in two bands with Ira on drums—what’s not to like about that?

Is your involvement open-ended? Has there been any discussion of a more permanent role?
Well, no one seems to really be aware of this, but I am an actual member of the band. Whether that means I’ll start to be included in the promo photos now, I have no idea, but I hope so. We’ve started writing and recording a new LP, and it’s very much a collective effort.