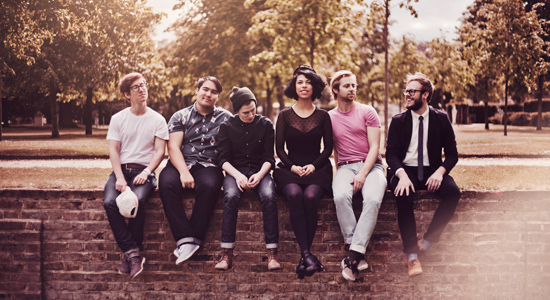 The tight-knit indie-pop upstarts in Phox grow up together

“We do everything at the last minute.” “That’s totally our thing” “That’s not Zach’s thing.” “It’s not my thing, but I’ve learned to adapt.”

MAGNET is in the six-by-five-foot green room at the Sinclair in Cambridge, Mass., with Jason Krunnfusz, Zach Johnston, Matt Holmen and Dave Roberts, four of the six members of Baraboo, Wisc.’s Phox. The room is crowded, but the vibe cordial as these high-school friends banter back and forth, finishing each other’s sentences and mowing down their dinners.

The band’s conversational style reflects its music—it’s playful and thoughtful, serious in its ambitions, but seriously fun when all is said and done. With folk-like delicacy, jazz-like precision and a very indie sense of irreverence, the group’s self-titled Partisan debut is one of the best underground-pop records of the year.

“I don’t even really know how it works, to be honest, but it’s everyone participating with (singer) Monica (Martin) bringing the seedlings,” Johnston says by way of explaining how the songwriting process works. “It comes from everywhere.”

“In the past, we’ve given a lot of time to songs,” says Holmen. “The new songs, we were like, ‘Let’s just go with our instincts and just do it, just record them as they come out.’”

The result is a record with childlike awe and grown-up ambitions. This is music that never gets in its own way, with the conceptual and aesthetic complexity of the songs seeming effortless. On tracks like the evocative and ethereal “Laura” and percussive-yet-languid lead single “Slow Motion,” Phox walks the line between precious and precocious with finesse.

“We had to make a lot of our own fun growing up, so we made music and movies and a lot of the same things we do now,” says Johnston. “It kind of feels like a continuation of childhood, in a way, which also makes it a big joke now that people are paying attention.”