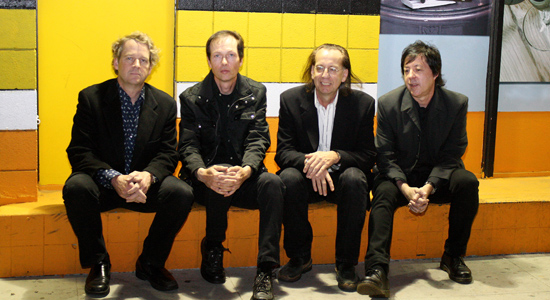 But that’s all ancient history. The co-founder of Jigsaw Seen 25 years ago (alongside ace guitarist Jonathan Lea), Davison gets his exercise these days as a professional dog-walker. Strolling L.A.’s concrete canyons gives him ample time to do what he does best: write distinctively original lyrics and melodies that give off the mere whiff of former heroes such as the Bee Gees, Who and Love.

Unlike previous albums, Old Man Reverb, Jigsaw’s fourth set of originals in the past four years, has a unified sound running throughout. “We used a lot of baritone guitar on this album,” says Davison, explaining the Duane Eddy/Marlboro Man moves that inhabit the work. “It plays in a lower register than a normal guitar, has fatter strings, and it sounds like something between a guitar and a bass.”

The oldest song, says Davison, is “Abide,” which he wrote in the early ’80s when still living in Baltimore. “It’s kind of a spaghetti-Western thing that I was recording on my little four-track cassette set-up in the basement,” he says. “And I remember my father, just coming home from work, busting down the stairs shouting, ‘What is that song? It sounds like Frankie Laine!’ He was so excited.”

Highlighted by Lea’s brazen one-finger piano, Jigsaw explodes out of the blocks like Iggy & The Stooges on “We Women,” a song that might sound like a putdown of the ladies if you’re a sloppy listener. “I decided to write it in the feminine gender, and I’d sing it that way,” says Davison. “Kind of like Joan Baez’s folk-music stance. Who better to write something like this?”

And he’s not kidding. Davison is related to legendary British suffragette Emily Davison, whose final act to advocate women’s equality was to run in front of Anmer, the horse of King George V, during the Epsom Derby in 1913.

There’s nothing nearly so noble about “Idiots With Guitars.” It’s the death knell for “bedroom rockers” who clog up various L.A. pop festivals like wads of platelets blocking a soggy artery. “Learn to play/Then dream the day away/Every note you play is met with indifference,” croons Davison, neatly excising these self-appointed pop prodigies.

The Jigsaw Seen plays live only sporadically these days. Bassist Tom Currier is in New York, and drummer Teddy Freese lives in Italy. But that hasn’t prevented eye-popping statistics, according to the band’s recent BMI statement. “We got 750,000 plays on internet radio in one quarter! How can that be?!” says Davison. “All those spins and they send us a check for $100?”

As for Old Man Reverb, Davison thinks it’s an unbridled success, declaring, “I look upon it as a greatest-hits album with songs we’ve never released.”