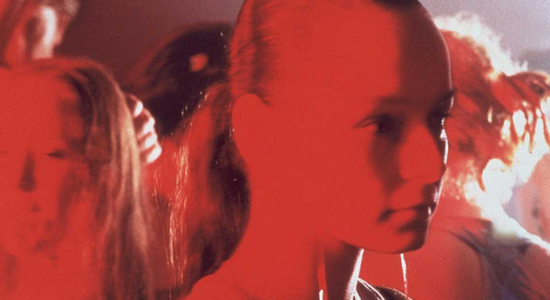 Morvern Callar has passed out on the floor of her flat in rural Scotland on Christmas Eve and doesn’t awake until Christmas morning. Instead of opening presents and enjoying a pleasant holiday breakfast, she finds, illuminated by the flashing light of her modest Christmas tree, the bloody corpse of her boyfriend lying next to her, sprawled halfway between the kitchen and the living room. Morvern (Samantha Morton) seems somewhat stunned by this turn of events, feeling for a pulse in his stone-cold hand.

Ignoring the behavior of any rational person—call an ambulance and the local police—she behaves almost as though this event is too large to grasp. She leaves the body where it lies and begins to make herself some breakfast. Then she sits down on the floor next to her Christmas tree and opens the presents from her boyfriend. The big bulky one is an expensive designer-made black leather jacket. Smaller gifts include a cigarette lighter and an audio cassette of music the boyfriend has made for her bearing his hand-printed label “Music For You.”

She seems to be trying to scrub this haunting event from her memory by having a long soak in the bath tub, spending lengthy periods of time under water. When she emerges from the tub, she mechanically begins to apply her makeup and paints her nails with sporty red polish. After getting dressed, Morvern notices the computer monitor is still turned on. It tells the rest of the story. Like a note from Alice In Wonderland, the screen says in bold letters: “READ ME.” She scrolls down to find her boyfriend’s last wishes. “Don’t try to understand it. It just felt like the right thing to do. My novel is on the disk. Put my name on top and print it out and send it to the first publisher on the list below. If they don’t want it, try the next publisher down the list. I love you. Be brave.”

This is all too much for Morvern, who looks in the closet for her oldest winter coat and walks down to the local train station, now deserted because it’s Christmas morning. She sits on a bench alongside a baggage trolley until the public telephone rings. Pausing over the phone, she debates whether she should answer it. She finally grasps the receiver and has a short conversation with whomever is on the line. This causes her to return to her tiny apartment. She steps around the body of her boyfriend, still lying in a pool of his own blood, sits down before his computer and inserts the disk containing his last work.

Before beginning the long task of making a paper copy of his novel, she types in the name of the author, as requested, at the top of the first page: “MORVERN CALLAR.”