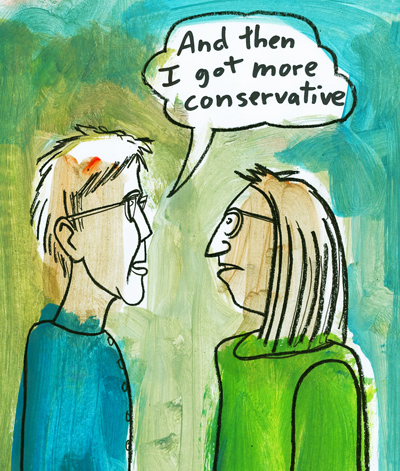 I wasn’t really part of the Vancouver punk scene as such. When I was 20 (1981), I was travelling around Europe for six months in a VW van going to all the art museums I could find. Prior to that, I was at the Vancouver School of Art (now Emily Carr University of Art & Design) for a couple of years studying painting. I didn’t come wriggling out of East Van all hepped-up with working-class angst. I sort of sashayed across the Lions Gate Bridge from North Van after being raised in an architecturally designed house by abstract painters who listened to a lot of jazz.

I left home at 18 because I wasn’t responding well to what I’ll call injustice. I worked full time, bought a sailboat, got married—and writing that here makes me aware that a person like this (like me) does not belong in a punk-rock scene. I was drawn into it as it was re-configuring into the 1980s, at a point when I felt very strongly about the injustice of being held within constructs that relied on psychological oppression—including sexism and capitalism. By 1985, I’d left the marriage (the boat was long gone) and opted out of my job to read, write, play music and go to shows. Punk was the very loud abhorrence of injustice, and that, for me, was articulated by the audience—dancing, colliding, sweating and engaging without relying on our own voices; we were out there bashing around in response to a very pure form of music that demonstrated our dissatisfaction and dissent. There wasn’t a feeling of violence or anything malicious going on. If you fell down, the person next to you would drag you back up again so you didn’t get hurt. It was a throbbing society of beings reveling in a sort of synchronistic building and releasing of energy that also fueled the bands. There was a weird reciprocity intrinsic to the band and audience dynamic. It seemed to me that there were larger philosophies at play in the scene : equality, fairness, anarchism and maintaining a presence with benefit shows, politicized posters, a few zines (before they were called zines) and various demonstrations. To me, not being part of the early days of punk, it seemed as though the individuals involved were a kind of emotional nobility who didn’t fit with the heartlessness of capitalism—maybe they’d been met with enough adversity early on and had veered off to a subculture of those similarly inclined toward idealism, to create deep friendships, some of which turned into bands and political actions.

For whatever reason, when I decided to participate in the punk scene as the singer in a band of two (Mecca Normal), I realized I wasn’t part of whatever I thought I was part of as an audience member. That is to say, people didn’t like us. They ignored us, basically. We were what you call room-clearers. Which turned out to be OK, because we ended up going on tour pretty quickly and found scenes in other cities where we were welcomed and included. Our first out-of-town shows were in Montreal, where we played two sold-out nights at an anarchist cafe and got standing ovations. It was totally weird.