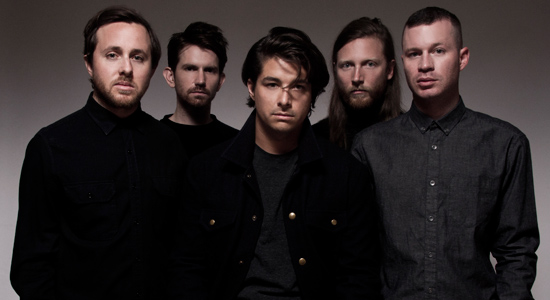 “I feel that I was born to scream into a microphone,” says Delta Spirit guitarist/vocalist Matt Vasquez. “We love to play loud, and from the start, we wanted to get into that American folk groove. This country has a tradition of people speaking their minds and questioning the way things are. There’s always been a feeling of ‘the haves’ against the ‘have nots.’ It’s a situation that’s as old as time, and one we have to deal with today. When you’re a little kid, you’re told to play fair, but as you grow up, you see that the world obviously isn’t fair. You can’t ignore that, and it’s easier to be an idealist in a song than it is in real life, so we write songs about what we think is right and just.”

The band’s new album, Into The Wide (Dualtone), is full of anti-war and pro-working-class songs, steeped in literary and biblical images that will make them resonate with almost any listener. The music is deep and moody, playing off the sound of chiming rock guitars, driving rhythms and anthemic vocals against a thick wall of dark, almost industrial noise.

“We spent a year confined in our Brooklyn studio, a claustrophobic recording and rehearsal space we built ourselves,” says Vasquez. “We were in our own world, and the songs took on the feeling of a person trapped in an urban setting and longing for the freedom symbolized by nature—or, in our case, touring. We wanted to capture the feeling of being confined, knowing it’s always possible to break loose, but in the process we got a little insane. Then we went to Atlanta to record with Ben Allen (Animal Collective, Belle & Sebastian) in a studio with big windows and a lot of natural light. The stress lifted off of us, and we were able to bring some sunshine into the songs.”

The band had more than 50 tracks demoed, but eventually pared the list down to the 11 tunes that appear on the album. The songs paint pictures of the disenfranchised, disillusioned and downcast citizens of our country, folks struggling to get by, but still maintaining their faith in the promises of the American dream.

“We decided we wanted to be more folk and less pop this time around,” says Vasquez. “There are no singles, and everything is introspective. We feel a connection to the story songs and murder ballads of traditional folk, but we want to write songs about this century, using the sounds of today to make them resonate with people. Some of those traditional ballads say more in three minutes than most writers can say in a novel. When you hear them, your imagination takes the place of all the prose. It may be a lofty aspiration, but those are the kind of songs we want to write. We want to make people think without telling them what they should think.”