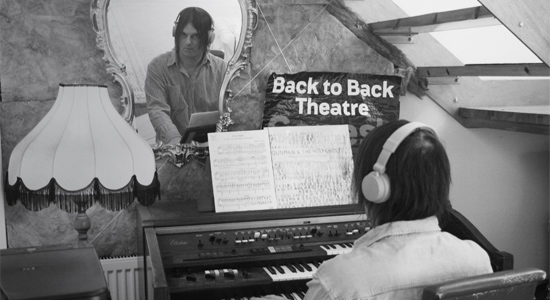 The best thing you can do when Anton Alfred Newcombe starts talking is get out of his way. Which is challenging, since Newcombe, who endured years saddled by a reputation for difficulty that far outstripped reality, is such an energetic and affable conversationalist. Today’s discussion, like the Brian Jonestown Massacre’s music, spills out all over the place. Mostly, though, it settles on Revelation, the new BJM album drawn from two years of work in Newcombe’s Berlin studio, and how a man who might have become one of contemporary psych/rock’s most tragic burnouts found himself in such a healthy space.

“We also made some signs that read ‘FESTIVAL OF YOGA,’” says Newcombe, remembering how one bona fide Bay Area hippie statesman approached the band as it was tearing down amps and movie projectors to say, “Hey, the show was really groovy, and also, when does the yoga start?”

That’s how it was for years: BJM got tagged as inner-space drug-o-nauts, Merry Prankster egotists and—this was the part that galled Newcombe most—flameout-skirting head cases, a band whose frontman seemed determined to pull the rug out from under it again and again. Much of that rep came via director Ondi Timoner’s 2004 film Dig!, which drew much of its dramatic charge from the supposed rivalry between BJM and the Dandy Warhols—a rivalry both Newcombe and DW’s Courtney Taylor-Taylor have since repeatedly said was largely fabricated through selective edits. It’s an irresistibly watchable film, especially if you’re a fan of the self-immolating talent narrative, but Newcombe’s real story is dramatic in much more compelling ways.

Revelation isn’t the work of the antic young band the BJM used to be. It isn’t the kind of album Newcombe used to come out of the studio with after days of gorging drugs, feeding the manic demon that lived in his brain, the one that insisted he make music so he could direct that awful jittery energy someplace. But it is unquestionably a BJM record, a reverb-saturated hour’s worth of ear candy. Some pieces are sweet, some are dark, but overall the album is as drone-fueled, echo-drenched and compulsively listenable as the band’s most interesting work. It’s also the work of a musician who’s come through half a lifetime of dirt and emerged as unscarred as anyone who’d spent so much time chasing dragons could hope.

“My understanding of ‘psychedelic’ was really always less to do with paisley shirts and acid, and more about mind expansion, being open to different ways of assembling sound,” Newcombe says from his Berlin home. He’d been tinkering for months, writing “imaginary film music” on synth equipment he’s owned since he was a teenager, coming up with disassociated musical themes and segments. “Then my label partners said, ‘Hey, if you wanna tour next year, you’re going to need to put an album out.’ And I had no anchor songs. Maybe one, that I’d written last October or something.”

The initial panic over sequencing and album-shaping gave way to a kind of Zen moment. “Sometimes I have a backbone of an album,” says Newcombe. “Other times I have nothing. And I’ve always thought in terms of albums, even in album sides. But I realized, with Spotify and iTunes now, people manufacture their own playlists. So, maybe I can just put out a bunch of ‘songs’ this time.”

As a collection—a psychic mixtape, as it were—Revelation holds up fine, especially since more recognizably BJM-style cuts like the swirling “Days, Weeks And Moths” and the spacey “Memory Camp” segue gradually into more expansive, even cinematic songs, of which “Fist Full Of Bees” and gorgeous album closer “Goodbye (Butterfly)” are the strongest. Newcombe spent days shifting and sequencing different tracks on his YouTube channel, getting feedback and paying attention to the groupings that stuck in his head.

“Ultimately, I want people to be happy with it, because I want to keep being able to make music,” he says. “But what you’re trying to do is second-guess what other people are going to get out of it, which is where you get led into a deep, dark cave. I know there’s a certain amount of resistance, or people scoffing over my lack of production values. But that doesn’t matter. I’m not going away until I die.”