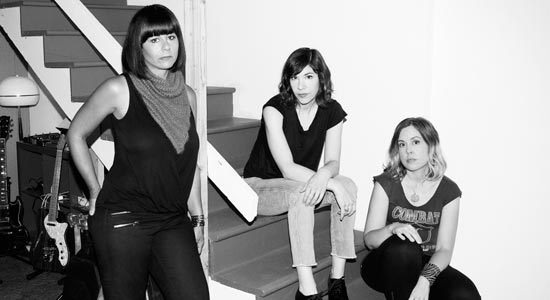 Sleater-Kinney fans, rejoice: The band has announced its first album in 10 years, No Cities To Love, which will be issued by Sub Pop on January 20. The trio will tour the U.S. and Europe following the release … The 20th anniversary of the Old 97’s’ debut album, Hitchhike To Rhome, will be celebrated November 17 as an expanded two-disc reissue via Omnivore … On February 3, the Church will release its 25th studio album, Further/Deeper, coinciding with the band’s 35th birthday … Panda Bear Meets The Grim Reaper is the fifth studio album from Panda Bear (a.k.a Noah Lennox of Animal Collective), due out from Domino on January 13 … Atlantic will issue Ghost Stories Live 2014 on November 24. It’s a concert film and live album featuring a DVD of Coldplay’s performance of its Ghost Stories album in March … Piano virtuoso Maki Namekawa performs the work of Philip Glass on double-album Philip Glass: The Complete Piano Etudes With Pianist Maki Namekawa, due out from Orange Mountain on October 21 … Yo La Tengo will reissue its 1993 album, Painful, as a deluxe two-LP/two-CD package, including 12 bonus tracks, on December 2 via Matador … The first installment of the Willie’s Stash archival recordings series, December Day (featuring Willie Nelson and Sister Bobbie), will be available from Legacy on December 2 … January 26 marks the release of the Charlatans’ 12th album, Modern Nature, via BMG Chrysalis … Four discs of previously unreleased and rare Brian Eno material—Nerve Net, The Shutov Assembly, Neroli and The Drop—are slated for a December 2 release on All Saints. Each will include a second disc of new music made by Eno in the spirit of the original release … Super Critical, the third album from the Ting Tings, will be issued by Finca/PIAS digitally on October 27 and physically on January 13 … UMe has announced the November 24 release of Cream: 1966-1972, a boxed set containing all of Cream’s studio and live LPs … The Brand New Heavies are set to release 10th studio album Sweet Freaks on November 24 via Eagle Rock … On November 24, Omnivore will reissue Game Theory’s 1984 album Dead Center as a deluxe expanded edition … Record Store Day’s Black Friday 2014 will be celebrated on November 28, and Legacy has announced it will be issuing limited-edition vinyl exclusives from Aaliyah, David Bowie, Miles Davis, Wu-Tang Clan, Elvis Presley and more … Wreckless Eric will reissue his 1996 album, The Hitsville Houseband ’12 o’clock Stereo’, via Fire on December 2 … Fat Possum has announced the November 25 release of Very Extremely Dangerous, a film by Paul Duane and Robert Gordon about Jerry McGill.