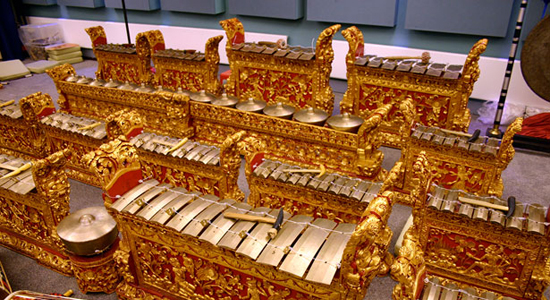 Salaz: Back in the late ‘90s, I’d started listening to minimalist composers like Steve Reich, Philip Glass and Erik Satie, but also heard similar approaches in electronic music with Brian Eno and Richard D. James (a.k.a. Aphex Twin). It was rhythmic, repetitive, trance-like and had a completely different sense of time and space. This path led me to Indonesian gamelan music. Indonesian gamelan music is thousands of years old, and it’s timeless as it is mindful of time. Unlike Western music, Indonesian gamelan functions more like the gears in a clock, with cyclical, repetitive, interlocking parts (called kotekan) overlapping until they realign on the same beat, usually indicated by a deep, low gong. I joined a gamelan ensemble in college called Sekar Setaman, and became aware of Larry Reed and his work with ShadowLight Productions, which produced shadow puppet plays in the style of wayang kulit. Larry tells complex stories with music, lights, shadows and perspective that for me resonate much deeper than any movie with the latest CGI effects.