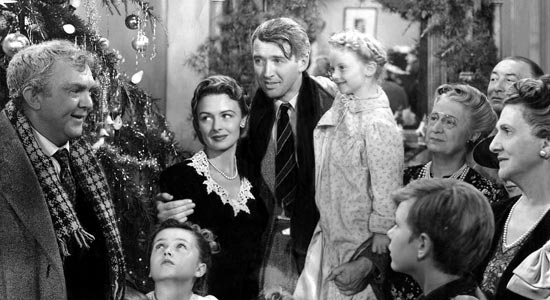 Christmas wouldn’t be Christmas without returning to Bedford Falls, the home town of Frank Capra’s three-hanky gem, It’s A Wonderful Life. It revolves around the family of its noblest money-lender, George Bailey (Jimmy Stewart), who sacrifices his college education to step into his late father’s shoes as the driving force behind Bailey Bros. Building & Loan, the tiny outfit that invigorates his town by giving home loans to those who have nowhere else to go.

Bailey Bros. has always been hot ashes in the eye of Potter (Lionel Barrymore), the unscrupulous tycoon who runs his business like he’s acquiring property in a game of Monopoly. With its factory shut down by the Great Depression, Bedford Falls is as vulnerable as any other town for a bank with insufficient funds to cover the balances of its customers to have to close its doors.

Just as George and his new bride Mary (Donna Reed) are driving to the train station for their honeymoon in New York City, he notices an unhappy crowd lined up in a torrential rainstorm outside Bailey Bros., demanding their funds. George hops over the counter of his office and delivers a Gettysburg-like speech to quiet down what threatens to become an angry mob.

“I beg of you not to do this,” he pleads with his customers. “If Potter gets hold of this company there will never be another decent house built in this town. He’s already got charge of the bank, the bus lines and all the department stores. And now he’s after us. He wants to keep you living in his slums, paying the rent he decides. Now, Ed,” he says to one of his oldest customers, “last summer when you couldn’t make your payments, you didn’t lose your home, did ya? You think Potter would have let you keep it? We don’t have the money on hand to repay you. Your funds are being used to build the house of your next-door neighbor. Listen, we can get through this thing. We’ve just got to stick together.”

In the back of the room, Mary waves the wad of cash they’d saved up to use for their honeymoon that weekend. Thinking fast, George offers to pay back a portion of each patron’s savings with his own funds to tide folks over until the bank re-opens. As the office clock is about to strike six, George counts it down: “Three, two, one … Bingo! Bailey Bros. is still open!” He ceremoniously walks his last two dollars into the safe and raises a glass in toast, “To poppa dollar and momma dollar. And you’d better have a family, real soon.” Immediate crisis averted, certainly, but what could cause such a good man, a few years later, to want to throw himself into a raging river on Christmas Eve?