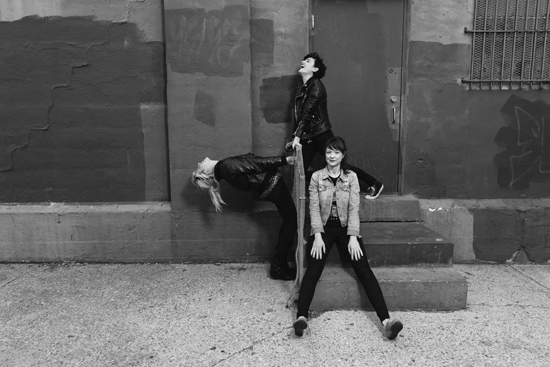 If we’re handing out superlatives, we have to award Best Phone Skills to Mary Timony for the rather hilarious way she started our Monday morning conversation. It was a simple hello delivered with quizzical sitcom-quality timing that surprises both of us—maybe it means the Suzi Quatro/Leather Tuscadero references we’d used to describe her new band, Ex Hex, and debut album Rips weren’t entirely off base. And just like the Happy Days rock ‘n’ roller, Rips is just too cool, one of the raging guitar-pop albums that record nerds dream about. “It has been kind of insane,” says Timony. “We just got back from tour, and we’ve been extremely busy. Just a lot of driving and playing—a crazy tour. But it’s good to be back.”

The band is indeed busy—24 hours after we talk, Timony and Co. will be making their Late Night With Seth Meyers debut—and shows no sign of slowing down. Since its first set of shows in the spring (yes, you read that right: first tour ever), Ex Hex has dropped two videos of slapstick alt-rock shenanigans, wooed critics just about everywhere and wowed fans across the country. For real, when MAGNET saw Ex Hex open for Rocket From The Crypt, the ladies had barely unplugged before we were sending out “BEST. BAND. EVER” texts to every person we know. Needless to say, deciding on our album of the year was a no-brainer. We caught up with Timony to chat about skipping work to go see metal shows, public-access TV and punk-rock pastry chefs. —Sean L. Maloney

What was the best show you played in 2014?
It was in Minneapolis a couple of weeks ago on this tour. There were a few reasons it was a crazy night. I mean, the night was crazy, which is why it was my favorite, but it was actually a really good show. You could tell people had heard the record, and people were smiling and dancing, which was really fun. I love playing the 7th Street Entry because that’s where parts of Purple Rain were filmed. So, that’s always fun. There were like four shows … there was a huge hip-hop show—I don’t remember who it was—playing down the street, the Black Keys were playing across the street at some convention-center thing, and at this other club Pentagram was playing, which was really weird. So, we end up playing a really fun show. We get offstage and go to the merch stand, and this girl came up to us. Somehow she had a connection to the Pentagram show. So, we abandon the merch stand—which is very irresponsible [laughs], not a responsible thing to do—but we left it all there to see Pentagram. And it was fucking awesome. It was the best show—Pentagram is so cool and I love all those songs. So, we just walked down the street and saw Pentagram. I feel bad if anybody wanted a record—I’m sorry. We just left a sign that said “Back in 10 minutes.” [Laughs] That was definitely my favorite.

Who was your favorite band of 2014?
I knew we were going to do this interview, so I made a list of my favorite records. It’s hard to pick just one. I’ve been listening to Ed Schrader’s Music Beat—they’re from Baltimore. I’ve heard that live it is just the best thing you’ve ever seen—I haven’t seen them, but that’s what I’ve heard. My friends played with them and were freaking out about it. I really like that record. ’m excited about this band Public Access TV; I don’t know if they really have anything out yet. Do you remember that band Be Your Own Pet? John Eatherly from that band has a new band—I know him from when he played with Eleanor Friedberger. When he was playing with Eleanor, Wild Flag was on tour with them, and somehow I got some of the demos they made in GarageBand. I think a friend sent them to me? But they are so good, and I keep listening to those demos over and over again. And he’s got a new band, and I’ve only heard a few songs online, but they’re the same songs from the demos. They’re really good. Oh, and I’m obsessed with that King Tuff record—it’s probably my favorite record of the year. I am really excited about the Slant 6 Soda Pop Rip Off reissue on Dischord. That’s probably my reissue of the year. That’s one of my favorite records, and it’s nice to know that it’s coming back, that people still love it. I know some younger people [in old-man voice] I know of some younger people [laughs] that really love that record, but they are D.C. people. It’s one of those records that it’s confusing why it’s not a bigger thing. I don’t know—I’m glad that it’s reissued because it is so fucking good.

And what was your best meal of 2014?
Do you know (Born Against/Universal Order Of Armageddon drummer) Brooks Headley? He just had a book come out (Fancy Desserts) about being a pastry chef. We got totally lucky—he hooked us up at Del Posto in New York and let us try all of this amazing food. It’s like the fanciest restaurant in New York, and he hooked us up with a huge-huge-huge mega-discount, so that was really fun. It was this really incredible Italian food, and then a bunch of his desserts that were just out of control. I mean, there was like 10 of them and they were all incredible, all these sorbets and chocolates. It was insane. They were so good.