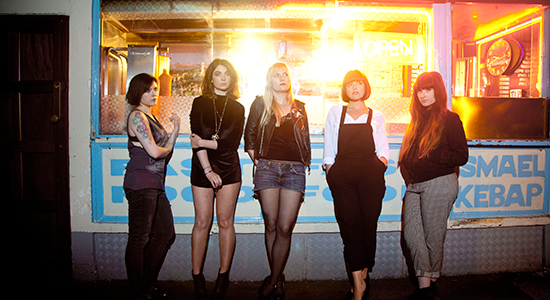 Dublin quintet September Girls play a fuzzed-out brand of shoegaze-y garage rock. It’s a unique blend of genres and works quite well together. Their music oozes with catchy harmonies and noisy goodness, and now they have agreed to make MAGNET a mix tape. Check it out below.

Lower Dens “Brains”
Sarah: This song kills me in the best possible way; it’s genius. I don’t think I will ever tire of it. Every time I hear it, it takes over me and I get lost in it. Although it’s quite a recent song (2012), it’s nostalgic for me. When it was released, I was figuring out some life stuff, and with this song I could just close my eyes and escape. I love how it builds and builds, drums, then guitars, then an open hi-hat, some organ, then Jana’s voice. At about 1:40, the music strips back and the song starts to build up again through some amazing layered vocals. It’s sort of mysterious—it’s perfect. Video

George Harrison “My Sweet Lord”
Caoimhe: This is probably the most uplifting song of all time by my favourite Beatle. It’s so simple, and I love the opening, the jangly layered guitars and then the solo bit. George’s guitar lines are so distinctive and melodic. He was sued by the Chiffons because the vocal in the chorus is similar to their song “He’s So Fine,” but his wife Patti Boyd said he didn’t even have a radio during that time. Video

Françoise Hardy “Tous Les Garcons”
Caoimhe: Françoise Hardy’s vocal delivery is always so cool. I love the crazy nursery-rhyme-style music in this song. It’s a song about being lonely as a teenager—seeing everyone else your age in love when you’re not. Video

Shellac “Prayer To God”
Paula: Just an unbelievably powerful song. Heavy of music and tone, I think it would be hard not to feel something listening to this. The lyrics detail how the protagonist would like God to treat his ex-girlfriend and her new boyfriend. “Her, she can go quietly, by disease or a blow”/”Him, just fucking kill him, I don’t care if it hurts.” There’s an element of cowardice and helplessness to the lyrics as well, almost as if the singer would do these things himself if he could. Instead, he pleads with God to do his work for him. Video

Almighty Defenders “Cone Of Light”
Paula: Almighty Defenders are a supergroup of sorts, consisting of the members of Black Lips, King Khan & Mark Sultan (a.k.a. BBQ).The first time I heard this, I thought it was an old Sam Cooke song I hadn’t heard before. The album the song is taken from came about when Black Lips got chucked out of India whilst on tour as a result of some high jinks. They fled to Berlin, hung out with King Khan & BBQ and recorded this amazing album. Video

Mac DeMarco “Passing Out Pieces”
Jessie: This song has got this crazy harpsichord synth, a super chilled-out bass line and shimmery guitar. It reminds me of a long-lost George Harrison tune. I first heard this song over the Summer, and it’s got this really sunny feel. Plus it has a long fade out, which no songs seem to do anymore. This is me and Jasper (my one-year-old)’s jam. We put Salad Days on the record player, turn it up really loud and have a dance around the living room. Video

The Smiths “Heaven Knows I’m Miserable Now”
Jessie: I could listen to this song all day, every day. Johnny Marr’s amazing jangly guitar and Morrissey moaning about first world problems. The song also reminds me of being 20, happy in the haze of a drunken hour being driven home to Brooklyn after giving myself a massive sunburn at the Jersey Shore. I was certainly miserable the next morning. Glorious. Video

The Cars “You Might Think”
Lauren: I love the Cars. To me they’re pop perfection, and “You Might Think” is a shining example—a three-minute smile. Plus, the image of Ric Ocasek as a fly for some reason has stuck with me since childhood … no idea why. Video

Weezer “Island In The Sun”
Lauren: Weezer are one of my favorite bands, and when they put this one out, I went apeshit for the song and video—I mean, bear cub. Lion cubs. Orange kitten. Baby giraffe. ‘Nuff said. My boyfriend at the time bought the CD single for me as a cute gift so I’d have the video, but it turned out to have the alternate video at the Mexican wedding on it. Poor fella was crestfallen. Video