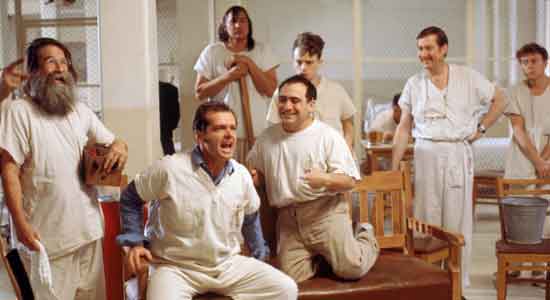 It’s funny how things can fall into your lap just because you write for various indie-rock magazines—MAGNET being top of the heap. In 1994, I got a free pass into an all-star benefit concert for storied San Francisco rock promoter Chet Helms, the Texas transplant who ran the Avalon ballroom back in the ’60s, in competition with Bill Graham’s Fillmore auditorium.

While sipping a beer in the dressing room of Big Brother & The Holding Co., 25 years after their lead singer, Janis Joplin, flew the coop, a grizzled, muscular guy walked up to me and introduced himself. It was Ken Kesey, author of One Flew Over The Cuckoo’s Nest and Sometimes A Great Notion, as well as the former leader of a loose-knit entourage calling themselves the Merry Pranksters, a vital part of the early SF rock scene, before LSD was declared illegal. I didn’t think to ask Kesey if he liked Jack Nicholson’s performance in Cuckoo’s Nest, but I can’t imagine he didn’t dig it.

In an opening sequence, parodied five years later by Stanley Kubrick in The Shining, a car is seen in the distance far below, winding its way through rugged, dew-soaked Oregon back country early in the morning. Instead of a luxurious ski resort, the car pulls up in front of a mental hospital just as the morning shift is reporting for work, and the driver opens the door for a handcuffed man in a knit cap. “OK, my friend, let’s go,” says the driver, leading the man inside.

A sugary female voice over the hospital PA announces, “Medication time,” as if instructing a kindergarten class. The stupefied inmates line up to take their morning meds under the watchful eye of Nurse Ratched (Louise Fletcher). A crazy half-laugh reverberates from the rotunda stairs above as a few of the inmates observe the new arrival, J.P. McMurphy (Nicholson), as he’s signed into the joint for what he believes will be a short stay. One of the uniformed guards removes the manacles from McMurphy who promptly jumps up and down, screeching like a baboon, then grins at the other guard and kisses him squarely on the cheek.

McMurphy is brought to the office of Dr. John Spivey (Dean Brooks) for evaluation. “What a pleasure it is to meet you,” says Mac. “Sure, pull up a chair and let’s talk,” replies the doctor. “That’s a helluva fish, there, doc,” says Mac, noting a photo on Spivey’s desk. “It took every bit of strength I had to hold it while they took the picture,” says Spivey, reviewing McMurphy’s rap sheet. The doctor says, “You’ve got five arrests for assault. What can you tell me about that?” Running his fingers through greasy hair, Mac answers, “Five fights, huh? Rocky Marciano’s got 40, and he’s a millionaire.”