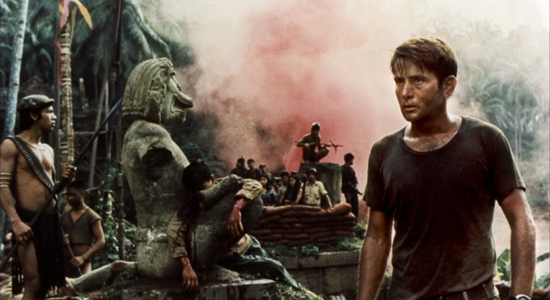 You have to remember one important difference between harrowing recent film portrayals of Middle Eastern combat, such as The Hurt Locker and American Sniper, and Apocalypse Now, a terrifying look at the Vietnam War. Troops seen in the first two films all volunteered for service, but most of those sent to Vietnam were there against their will, victims of a hungry, ever-expanding American draft. With this war’s reason for being getting murkier by the year, one thing was perfectly clear: President Lyndon Johnson refused to be the first American chief executive to lose a war. As it turned out, he, himself, would die in 1973 before this insane conflict would finally end in 1975 with the fall of Saigon.

The first thing you hear as you awake from a self-induced coma is the “thwip thwip thwip thwip” of those damn helicopter blades, cruising the jungle all day, dropping tons of napalm bombs on the Viet Cong in a fiery barbecue that would rival hell, itself. Then it’s Jim Morrison singing the first chorus of “The End,” the Doors’ addictive death knell: “This is the end, my only friend, the end, of our elaborate plans, the end, of everything that stands, the end, I’ll never look into your eyes again.”

The helicopter blades have turned into the insistent ceiling fan of a steamy, cheap Vietnamese hotel. Lying on the bed, staring upward, is Captain Benjamin Willard, a U.S. Army officer recently returned for another tour of duty, who’s beginning to regain his senses after a rough night. “Shit! I’m still only in Saigon!” says Willard (Martin Sheen), waiting for a special-ops mission. “Every minute I stay in this room, I get softer,” says Willard to himself. “And every day Charlie squats in the jungle, he gets stronger.”

Willard’s mission comes sooner than expected when two soldiers report to his hotel room with orders to transport him to the air field to meet Lt. General Corman. “It was a real choice mission, and when it was over, I’d never want another,” says Willard, narrating the scene. Col. Lucas shows Willard into the general’s office where Corman rolls a tape of the voice of Col. Walter E. Kurtz, a maverick Army officer now operating without authorization in Cambodia.

“Walt Kurtz was one of the most outstanding officers the Army’s ever produced,” says the general (G.D. Spradlin). “But in this war, things get confused. Sometimes the dark side overcomes what Lincoln called ‘the better angels of our nature.’ Every man has a breaking point, and Walt Kurtz has reached his.'” Col. Lucas (Harrison Ford) steps in, “Your mission is to proceed up the Nung River to infiltrate the colonel’s team and terminate his command.” A man in civilian clothing addressed only as Jerry, adds gravely, “Terminate with extreme prejudice.”