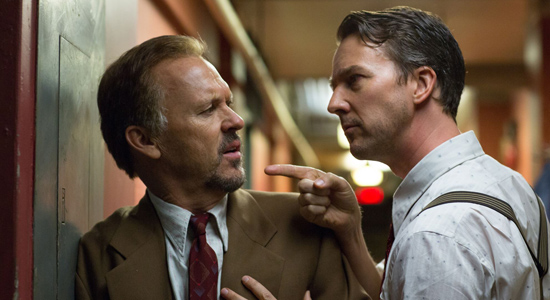 Yes, it’s true! MAGNET editor Eric T. Miller’s hellacious work schedule once again leaves him absolutely no time for something as frivolous as picking the five best films of 2014 for the unwashed masses who demand such things. It’s left to the office’s Bob Cratchit (otherwise known as Jud Cost) to shovel the last few pieces of coal onto the fire and stay late to get his copy in while Scrooge (Miller) has a bountiful dinner at a local hostelry. Cost has finally shaken that wimpy “no particular order” bug of years past and insists that these five movies are, yes sir-ee Bob, in a carefully picked order.

1) Birdman
My old man used to shoot rambling Super-8 reels of my brothers and me “spear-fishing” for trout, using snorkel masks, flippers and a camp-knife lashed to a willow branch in the snow-fed source of the American River near Lake Tahoe, Calif. All we ever caught beneath those frigid waters was a blinding headache. But those jittery images somehow returned to me as I watched Birdman, shot unlike any professional movie I’ve ever seen. Its actors seem to make their entrance by jumping onto the ramp of a spinning carousel. A shoulder-held camera, seemingly bumping into things while trying to follow Riggan Thomson (Michael Keaton) as he darts around the battered corners of Broadway’s venerated St. James Theatre, may have you reaching for the sea-sickness meds. A veteran movie actor, Riggan is trying to improve his public image by doing something more lasting than donning that stupid Birdman costume for yet another slice of this blockbuster franchise’s meatloaf. Some sources falsely reported Birdman was shot all in one take. Not true, although most of its scenes are very long and must be precisely choreographed. But nothing stands in the way of Alejandro González Iñárritu’s whirling masterpiece, perhaps the most irresistible movie made in the new millennium.

2) Boyhood
Like Birdman‘s signature skittering pace, Boyhood also has something unique in its makeup. Director Richard Linklater shot the film annually over a period of 12 years. He began with a six-year-old kid named Mason (Ellar Coltrane) and, fingers crossed all the way, no doubt, finished with a young man of 18, about to enter college. Linklater needn’t have worried: The kid is a revelation. Filming every year makes the age progression of its characters appear seamlessly organic in the final production. Ethan Hawke, who plays Mason’s dad, mentioned to his real wife that he’d just done the best work of his life, about five years into the project. When she asked when she’d be able to see it, he had to answer, “In about seven years.” Describing Boyhood‘s everyday story line is like describing Moby Dick as a book about a crazy guy and a whale. To boil it down: It’s the nothing more than the story of Mason, his older sister Samantha (played by Linklater’s daughter Lorelei), their divorced mom (Patricia Arquette) and their dad. Mom’s concerned about such things as the kids doing their homework and getting enough to eat, while Dad, who picks up the kids every other weekend, takes them bowling and teaches them how to play golf; nothing out of the ordinary. It’s the sweet way they go about it that makes all the difference.

3) American Sniper
Great anti-war novels—from The Red Badge Of Courage, War And Peace and All Quiet On The Western Front to The Naked And The Dead, On The Beach and From Here To Eternity—have attracted large followings, whether in print or adapted to the big screen—or both. You could probably get many different answers as to whether American Sniper, one of Clint Eastwood’s most telling shots in a storied career, should join those esteemed ranks. Or whether its stance is even anti-war, at all. Take it from me, it is. Staggering your way through a battle scene that’s engulfed by a blinding sandstorm to the point where you can’t tell who’s shooting whom should convince anyone. Bradley Cooper is almost unrecognizable here as Chris Kyle, the Navy Seal whose hundreds of known kills have made him the most accurate sniper in U.S. military history. Kyle accompanies units sent to highly volatile spots and takes out any resistance they may encounter. But the real battle takes place when he returns to the Texas home of his wife and two kids when his current tour of duty is over. Adjusting to grocery shopping or getting the car lubed when his mind is still in Afghanistan proves next to impossible. By the time Kyle begins his fourth tour of duty, the egg is about to crack.

4) Whiplash
Without the jaw-dropping performance of J.K. Simmons, it’s safe to say Whiplash would not have existed. Previously best known as a CIA officer trying to clean up the mess made by Frances McDormand and Brad Pitt in the Coen brothers’ Burn After Reading and, more recently, as an insurance company’s spokesman in TV commercials, Simmons, at age 59, gives the performance of a lifetime here. He is Terence Fletcher, the instructor of the advanced jazz band at Shaffer, a prestigious East Coast music school a la Berklee or Juilliard. It’s safe to say, the most hard-boiled Marine drill instructor ever committed to celluloid couldn’t have matched Simmons’ maniacal intensity. His students visibly shake when they hear his footsteps approaching the band’s practice room. The instructor’s principal adversary is Andrew Neiman (Miles Teller), a peach-fuzzed jazz drummer who doesn’t stand a chance when Fletcher gets hold of him. To prove a point about tempo, Fletcher gets in Neiman’s face and asks him to count out a four-beat measure. A micro-second before (or after) Neiman reaches “four,” Fletcher viciously slaps the hapless percussionist in the face, then asks him if he was rushing or dragging the beat. Director Damien Chazelle reportedly told Simmons he wanted to see him “take it past what he thought the limit was. I want to see a monster.” That’s exactly what he got.

5) The Imitation Game
Several years after the 1939 declaration of war between England and Germany, at the height of World War II, the British were being mercilessly bombed by the German Luftwaffe, night after night, just as its ships were also being sunk on the high seas by Nazi submarines. The code the Germans used to orchestrate this reign of terror was deemed unbreakable until Alan Turing came along, confident that he could do what no one else had accomplished. Turing (Benedict Cumberbatch) was already building what would become the world’s first computer, a giant piece of hardware that he would employ to finally beat the Germans at their own game. The smartest of those selected to form a team at Bletchley Park turned out to be Mary Clarke (Keira Knightley), whose proximity to Turing during stressful times helped form a permanent bond between them. Just not the kind of bond she’d hoped it might be. When he finally told her he was a homosexual, she admitted she’d pretty much already figured that out, and it wouldn’t make any difference to her. Turing is known nowadays as the father of artificial intelligence whose work not only saved countless lives but paved the way for the computer that remains the backbone of today’s daily life. In post-WWII England, he was thought of by his less than grateful government as just another pansy to be sent off to jail.