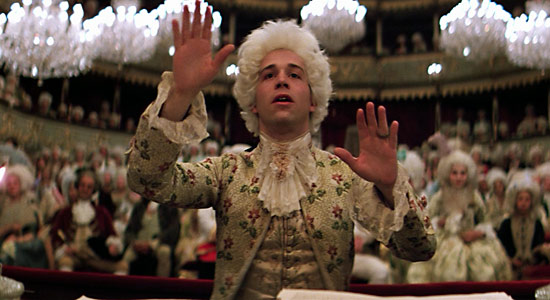 Tom Hulce hit the jackpot early in his career with key roles in a splashy pair of movies. He was Larry Kroger, one of two wide-eyed pledges to Delta Tau Chi in 1974’s Animal House, which absolutely nailed an out-of-control, keg-swilling, early ’60s college fraternity. It was done so well nobody has even attempted to do it since. Then there was Hulce’s career zenith as Wolfgang Amadeus Mozart in Amadeus, a lavish costume drama depicting the young man who was at once a baroque musical prodigy and a foul-mouthed womanizer. With the titles of both movies filed under the letter “A,” Hulce’s career, unfortunately, never made it to “B” and “C,” let alone “X, Y or Z.” But it was a hell of a start.

Amadeus, meaning “one who loves God.” opens with Mozart’s musical rival, Antonio Salieri (F. Murray Abraham), now an old man near death living in an insane asylum after a failed suicide attempt, confessing the murder of the brilliant young composer to a priest, after which Salieri begins a winding narrative.

The highlight of Salieri’s early encounters with the “boy genius” is Mozart’s arrival at the court of “the musical king,” the Holy Roman Emperor, Joseph II. “Young man,” says the emperor (Jeffrey Jones), ‘we’re going to commission an opera from you. Have we decided whether it will be in German or Italian?” the monarch asks the kapellmeister and other musical dignitaries. “I believe it was to be in Italian, sire,” says one. “Oh, German, please let it be German,” begs Mozart. “I’ve already found a libretto that is quite amusing.” His interest piqued, the King commands, “Tell us the story.”

Mozart stammers, then emits an insane cackle, “Well, well, it’s, it’s, it’s…It takes place in a harem, Majesty.” The gasps in the room feel as though someone has opened a window. “You really believe that subject quite appropriate for a national theatre?” asks the monarch. “It’s not indecent, it’s full of German virtues,” responds Mozart. Salieri, the court composer, asks what those might be. “Love,” Mozart responds. “Ahh, of course, we know nothing of love in Italy,” quips Salieri, a transplanted Italian, to much laughter. “Ah, well, let it be in German,” decides the emperor, a native German as is Mozart.

Salieri has written an homage, a welcoming march, to the precocious musician and plays it perfunctorily on the keyboard. When Mozart critiques the melody, the King asks him to play it on the harpsichord and hands him Salieri’s transcription of the piece. “It’s all up here,” replies Mozart, pointing to his head. He sits down to play the simple tune as the Italian has written it, then proceeds to embellish the work with every show-stopping element in his arsenal, leaving Salieri feeling like a horsefly squashed by a coach’s windscreen.