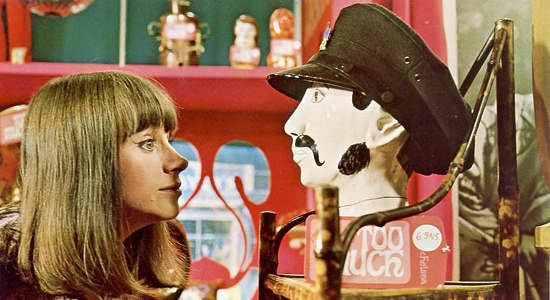 All right then, who else do you know who would heartily recommend a British comedy that isn’t really all that funny? The casting folks must have thought they’d scored a major coup for Smashing Time by landing both Lynne Redgrave (who starred in Georgy Girl in 1966) and Rita Tushingham (who won BAFTA’s best actress for 1961’s A Taste Of Honey). Both women got raves in Girl With Green Eyes in 1964. Trouble is, those previous kudos were earned for their work in films with at least a modicum of sensitivity. None of that happening here.

When the two chicks arrive in London, gaudily dolled up in what they believe to be hip threads, they begin their search for Carnaby Street to get jobs as fashion models. But they decide to count their money before buying breakfast. Brenda (Tushingham) immediately falls into a mud puddle. As financial manager, she fishes from her purse the 23 pounds that took the girls months to save. While she doles out a small sum to Yvonne (Redgrave), the rest of their cash is knicked from her purse by a wandering hobo. Then Brenda falls in a mud puddle for the second time. Hmmm.

Leaving her chum to pay for their meal, Yvonne swans off to begin her life as a runway pro and to find them a hip flat to rent on Carnaby Street. With no cash, Brenda is left to wash towering stacks of dirty dishes in a particularly foul high-street cafe. That’s when the fun really begins, some might think. A disgusting, no-dialogue food fight ensues between customers and the cafe’s staff using large squeeze bottles of everything from super-bubbly dish soap and artist’s dayglo paint to ketchup, mustard and liquid horse manure meant for the home garden. Everyone gets as filthy as if they’d been working at the local sewage treatment center.

So what’s the matter? You’re not laughing, I can sense it. You see, you can’t really judge this movie by its sorry attempts at slapstick. It falls flat at a genre best left to those who knew how to pull it off: Buster Keaton, Harold Lloyd, Charlie Chaplin, Laurel & Hardy.

Smashing Time‘s trump card lies in the fact it was shot in 1966-67, right at the same time the Swinging London/Carnaby Street phenomenon was really happening. All the kooky art galleries, old-school pubs and trendy boutiques you see on location here are the real deal. The splendid mod clothing, swell parties and the raving, high-octane sounds spilling from smoky, uncomfortably small night clubs are exactly what they seem to be. They’re not some set decorator’s attempt at recreating an era never experienced first-hand. You might even look at this as a documentary of a long-gone time that will never come again—because that’s what it is.