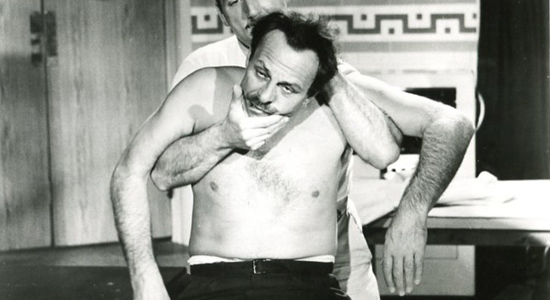 Gap-toothed, British comic genius Terry-Thomas plays himself, once again, in Kill Or Cure, a moderately funny, but none the less enjoyable, work from 1962, recently unearthed from the archives of its American distributor, MGM. And why not? Fifty years ago, he was the best thing going in a well stocked British comic pantry that also included Peter Sellers, Alec Guinness, Alastair Sim and Ian Carmichael. All Terry-Thomas had to do was look down his nose, past his time-worn RAF mustache, and snidely declare, “You’re an absolute shower!” at some poor sod, and he’d done the business.

He plays hare-brained private eye Capt. J. Barker-Rynde here, hired for some bloody reason to investigate a murder at a summer holiday retreat hotel nestled somewhere in the idyllic English countryside. Barker-Rynde’s photography shop in town has a posh-looking, high-street facade whose window advertises, “Weddings A Specialty.” The less conspicuous window of the second-floor office above offers the services of Barker-Rynde, Private Detective and adds a single line beneath: “Divorce A Specialty.”

Whether he’s spying on some shapely girl’s second-story bedroom while perched high atop his collapsible, pocket-sized ladder, or selecting his stiffest cosh from a rattling, heavy bag of detective tools, Barker-Rynde is TT at his “chocolate teapot” best. There will be many bandages applied by the hotel’s medical staff to the shiny noggin of Detective Inspector Hook (Lionel Jeffries) before Barker-Rynde falls asleep again. After a quick assessment of the evidence at the hotel, Hook offers his verdict on the nature of the crime at hand. “Murder, sir,” he states to Dr. Julian Crossley (Dennis Price), the hotel’s owner. “According to our lab reports, there was some sort of poison called Ricin in the lady’s tin of carrot juice.”

As the tale unfolds, Barker-Rynde will acquire a bumbling “Watson” in his crime-solving slight of hand in the person of Rumbelow (Eric Sykes) who’s employed as the hostelry’s physical-training director. The pair decides to throw in together soon after they are caught red-handed, dressed like second-story men in dark hoods and trousers, independently sneaking around the cabin of the young lady who has somehow recovered from the work of the poisoner.

She has easily got the drop on both and is pointing a small pistol in their direction and saying, “Point straight and shoot.” Rumbelow nervously squawks, “This man is a paid assassin!” jabbing a finger toward Barker-Rynde. “Don’t be so ridiculous!” expostulates Barker-Rynde. “I’m a fully paid-up member of the Detectives Association.” He shows them both his membership card, then, flush with victory, accuses Rumbelow of the same foul crime. “Do you deny the deceased appears in your physical therapy files with the most curious notation ‘AV2’ added to it? Some deadly poison, no doubt.” Rumbelow smiles broadly and declares, “No, no, no! AV2! Apple vinegar, two squirts.”