When she was younger, Allison Moorer used to believe that she wanted an intellectual existence, a life of the mind. But now, at 42, she sighs, “What I’ve realized that I have is a life of the hands—I’m always just making something, or I’m writing or drawing something, because it makes me feel connected; it makes me feel real. It’s the same way with music—I just want to make it.” Hence, her latest ambitious set, Down To Believing, which documents her recent split from her husband, Steve Earle, and even the motherly guilt she felt when their son John Henry, now four, was diagnosed with autism two years ago. Moorer will be guest editing magnetmagazine.com all week. Read our brand new feature on her. 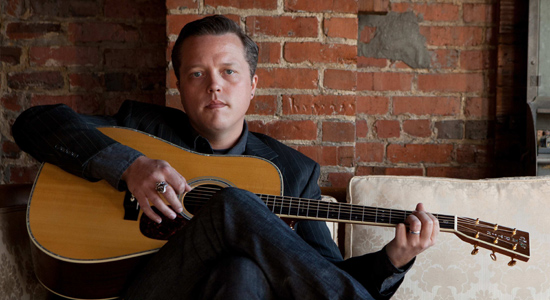 Moorer: The first time I heard “Cover Me Up,” I was in my car, headed to my publisher’s office in Nashville. I pulled out of what was then my driveway, having just put the freshly mastered disc that held Southeastern, into the player. “Cover Me up” is the very first song. I suspected, when I heard the lone acoustic guitar that starts the record, that he’d probably made a piece of business, that he wasn’t hedging by starting with an obligatory rocker and was about to tell me something important. It felt like he was staring something down.

I was struck by the first verse and the idea of a heart of the run keeping a hand on the gun. That’s a concept I fully understand and it made me emotionally square up with myself and want to turn the record off. He clearly had my number, and I wasn’t ready to hear it. But Jason is a friend and I was interested, so I let it play, and my guard came down after just three more lines. “Girl, leave your boots by the bed/We ain’t leaving this room.” Not only was Jason doing the best singing I’d ever heard him do, and I’ve heard him do some really good singing over the years, he was laying it all out there in a way that few people have the courage to do. When I heard him set into that first chorus, I didn’t drive off the road; I didn’t call anyone to tell them about it; I just let the tears roll down my face. He’d ripped my heart out in one minute and five seconds.

Kahlil Gibran wrote, “A great singer is he who sings our silences.” A great love song has to do the same thing. It has to be desperate. It has to feel a little bit like a tightrope walk, a little bit like it might just go crazy without letting you know exactly why. It has to have an x-factor. Yes, “Cover Me Up” is a gorgeous, edgy lyric and Jason laid down a bad-ass, naked vocal on it. That cannot be argued. But its x-factor is its laid-bare heart, its elements of despair, impatience and downright raw romanticism, and then ultimately its willingness to let the listener in on those things. It’s those things that few can dig for, find and then hold up for all of the world to see. And in my opinion, it’s those things within this song; this moment, if you will, that made Jason Isbell a star.