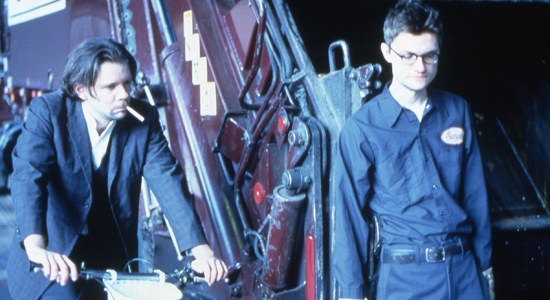 Fair Warning Department: The final film in Hal Hartley’s groundbreaking black-comedy trilogy that began with 1997’s Henry Fool and continued with Fay Grim in 2007 is about to reach critical mass with the April release of Ned Rifle. Those who want to catch up, or take a quick refresher course, have a couple of weeks to get it together. That’s about as much time as I had to plough through the first 50-plus episodes of Breaking Bad before the final eight chapters were telecast about two years ago.

After the morning truck full of recyclable garbage is unloaded, Simon Grim (James Urbaniak), dressed in a grimy, dark grey jumpsuit, punches the time clock and drinks a beer, all alone, for lunch. The stern-faced young man in the Buddy Holly glasses who looks as though he’s never laughed in his life, is shocked to see a young couple having sex right in front of him in one of the below-street level windows that surround the place where he works. The girl screams when she sees Simon, and the guy runs after him prepaired to beat his brains into pulp.

Safe at home back in Queens, Simon senses something big may be headed his way and puts his ear close to the pavement. Marching up the street as bold as Custer just before Little Big Horn, Henry Fool (Thomas Jay Ryan), in a three-piece suit, stops before the sign that reads “Basement Apartment For Rent” and struts right inside to have a good look around. He cranks up the gas furnace and turns to Simon, who’s followed him in. “Where do you have to go to get a six-pack of beer around here?” he asks, tossing the kid a crumpled bill.

Simon grabs a six pack of Bud from the cooler of the local convenience market as the two love-birds he’d interrupted earlier smirk at one another. She drops her panties then bends over and says, “Kiss my ass!” to Simon, while her partner heads off any possible escape. He grabs Simon’s head and yanks it toward his girlfriend’s bottom. The mute Asian lady behind the counter pushes the police alarm button, which triggers Simon to vomit all the clotted, spoiled milk he’d accidentally drunk for breakfast all over the girl’s rear end.

Back in the dingy basement apartment, Henry Fool carefully loads his books into a bookcase as Simon turns over the name tag on his suitcase. “Centuries ago, it had an ‘e’ on the end,” Fool remarks of his odd surname. “Where do you come from?” asks Simon. “Nowhere in particular,” replies Fool. “I go where I will, and I do what I can. That’s why I’m in trouble. I’m what you might call an exile. An honest man is always in trouble, Simon. Remember that.”