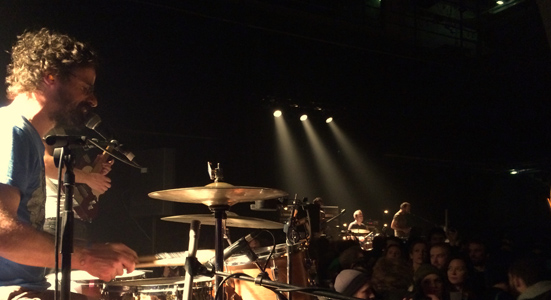 A collective of four French rock bands, La Colonie de Vacances (French for “holiday camp”) is a live collaboration in which the groups set up shop on separate stages, at the four points of the compass, with the audience smack in the middle. An inverted theater in the round, if you will.

Spectators mill about, wandering from one band to another. Often, they turn their backs to the stage closest to them to catch a glimpse of the other performers, who all play simultaneously. Such is the cross that swingers must bear: deciding where to focus their attention.

In fact, the playbill offers an enticing cast of characters:

Marvin: noisy punk-metal trio from Montpellier with a tasteful touch of keys.

Pneu: a drum-and-guitar spazzcore duo from Tours who marries the chaotic energy of Melt Banana with the ferocity and precision of Bad Brains.

That’s 11 musicians in total. A titillating ménage à onze. Sure, the songs are mostly linear, which allows all players to contribute with minimal complications. But it’s to the great credit of all four bands that this quadrophonic experiment doesn’t devolve into a murk of skronk nor restrict itself to a dull recitation of pre-fab banality.

With the encore, all lights are killed save for a single bulb hanging some 30 feet above the crowd. It sways violently, casting ominous shadows across the room. The effect is pleasantly nauseating.