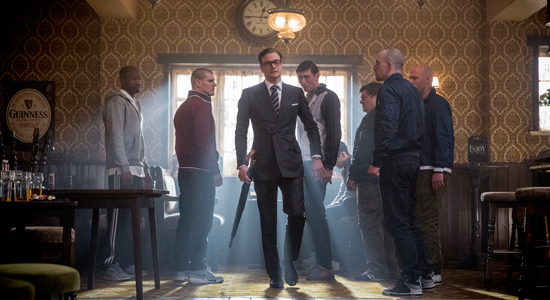 The measured pace of the first 15 minutes of Kingsman: The Secret Service might lead you to hope this might be an updated James Bond in the making. Its excellent cast includes Colin Firth as Harry Hart, the Kingsman agent who takes an interest in the son of a fellow spy who is killed in action. The shtick, a real groaner here, is that each agent assumes the code name of a knight of the round table with Hart as Galahad. Michael Caine grinds out a few minutes as Arthur, Kingsman’s CEO, and Mark Strong is Merlin, second in command. The early tip-off to the foul odor that will completely engulf this two-hour stinker (and those who sit through it) long before the credits roll is the appearance of the son of Hart’s fallen comrade. Gary “Eggsy” Unwin is played by Taron Egerton, a pretty boy who looks something like a pudgy Channing Tatum and spouts a clumsy British working-class accent that betrays the fact Egerton hasn’t a shred of acting talent. He couldn’t play a lamp post if they screwed lightbulbs into both ears. By comparison, Channing Tatum is Laurence Olivier. If they awarded platinum ingots for totally miscasting a usually excellent player, Samuel L. Jackson, as Richmond Valentine, the most pleasant “bad guy” in recent memory, would leave Donald Trump with nothing to wear but a wooden pickle barrel with two shoulder straps. Kingsman reaches its putrescent apex with 50 minutes left to tick off while peeking at your watch, when an entire church full of bigoted Kentucky rednecks is massacred, one by one, by Hart. Apparently, the Brits still haven’t caught on that the greatness of America lies not in the murder of those with repulsive points of view, but in its legal protection of such mean-spirited speech. Which goes to show why even lumpy gruel like Kingsman: The Secret Service can be found in American cinemas everywhere.