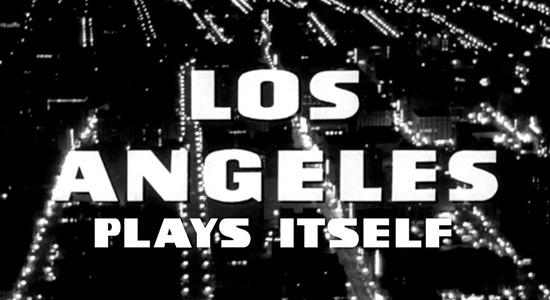 As the garish image of a ’40s strip club flickers across the screen,” Encke King, the deadpan narrator of this fascinating documentary, intones in a no-nonsense delivery, “Los Angeles is where reality and representation get muddled.” And it’s off to the races with one short shot after another that gets straight to the central nervous system of the City of Angels as well as any Beverly Hills neurosurgeon. Most of this is existing footage with some of it shot expressly for the project. The result is a wall-to-wall mindbender.

“A real movie shoot can create a better public spectacle than the fake movie studio tours,” says King as a city bus is hoisted by an industrial-sized crane and attached to the bottom of a large helicopter, a la the statue of Jesus flown through the Roman skies in La Dolce Vita. The images must speak for themselves as they come at you like logs rapidly floating downstream to a Canadian sawmill. Take them as they arrive as little explanation is given. “A place can become a historical landmark because it was once a movie location.” A sign explains that a Jackie Chan movie was once filmed there. The Ambassador Hotel has apparently been preserved as a film locale because it was the place where Robert Kennedy was assassinated by Sirhan Sirhan in 1968.

Many L.A. locales are named after Hollywood celebrities, such as Bob Hope Dr. and a park called the Bette Davis Picnic Area. And a small bust exists near the Griffith Park Observatory, commemorating the site where James Dean once challenged a fellow high school student to a “chickie run” in Rebel Without A Cause.

Then there are the steep concrete steps covering at least four stories up a hill in Silver Lake, a Los Angeles suburb. They are now named “The Music Box Steps” after the 1932 short where Oliver Hardy is chased all the way to the street below by a runaway crate with a piano inside.

“Los Angeles may be one of the most photographed cities in the world, but it’s one of the least photogenic. It’s not Paris or New York.” A razor-sharp image appears from The French Connection of three four-story walk-ups across the street, framed by a rubble-strewn empty lot in the foreground and two gutted brick warehouses on either side. “In New York everything seems sharp and in-focus. In smoggy cities like Los Angeles everything dissolves into the distance. Even close-up stuff seems far away.” A smeared image from To Live And Die in L.A. looks like it could be washed away with soap and water. At first glance this may seem to be a hatchet job on old L.A. Instead it’s a passionate love story that makes you see the old girl in a new light.