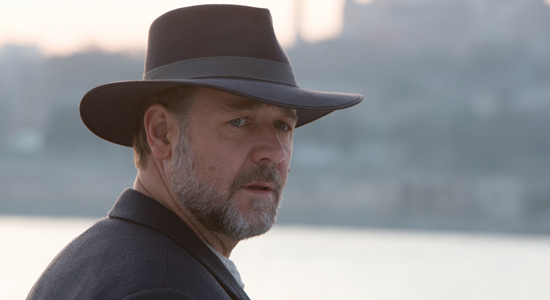 Whether he’s ducking friendly fire from the LAPD in a rundown motel in L.A. Confidential, fighting for his life with a short sword and a shield in Gladiator or creaming three Greek soldiers with a cricket bat in current post-World War I epic The Water Diviner, Russell Crowe hardly ever loses his cool. It’s his ace in the hole as one of the finest actors of our time, this ability to keep his head when everyone around him is going ballistic. Crowe’s understated work here is reminiscent of the most heroic moments of John Wayne (True Grit, Rio Bravo).

A few years after the end of WW I, the wife of Joshua Connor, overcome with grief by the loss of her three sons at the battle of Gallipoli in 1915, drowns herself in a pond. Connor (Crowe) swears he will bring the bodies of his boys back home and bury them beside their mother. The Aussie farmer possesses an uncanny ability to find water in the wilderness, a knack that will soon come in handy.

After arriving in Turkey, Connor meets Ayshe (Olga Kurylenkov), the proprietor of his Istanbul hotel, whose husband has also died at Gallipoli at the hands of the ANZAC troops. And he encounters Major Hasan (Yilmaz Erdogan), whose Turkish forces were responsible for taking the lives of Connor’s boys. Now working to identify the remains of the Gallipoli campaign, Hasan becomes an unlikely ally in Connor’s mission.

Crowe’s excellent directorial debut is an effective portrayal of the grisly side of what was once known as “the war to end all wars.” And, much like Saving Private Ryan, a World War later, it is highlighted by one man’s attempt to complete a Herculean task that seems well nigh impossible.