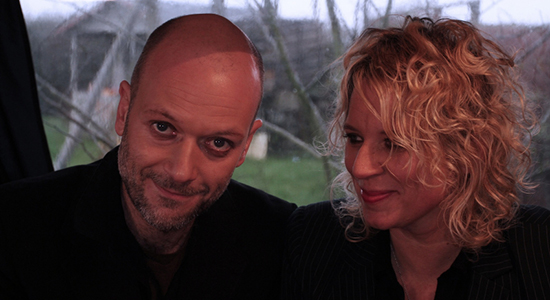 New-wave/pop sci-fi folk duo Blind Lake features Lotta Wenglén (guitar, bass, keyboards, drums, vocals) and Måns Wieslander (guitar, drums, bass, vocals). They use atmospheric melodies and layered synths to create a largely energetic sound and ready for the release of latest album On Earth, due out June 9. Their name is based on a 2003 sci-fi novel by Robert Charles Wilson, Blind Lake, in which scientists use alien technology and are able to follow the lives of aliens on other planets. Now Blind Lake, the band, has been so kind as to make MAGNET a mix tape, check it out below!

David Bowie “Five Years”
Wenglén: I listened to this album constantly as a kid (The Rise And Fall Of Ziggy Stardust). It was like a journey and a perfect soundtrack for me playing with my Action Men. Like The White Album with the Beatles, it kept me listening for details, and with every listen I found something new. I also sampled the drums in the intro for my first demo recordings on my four-channel Tascam porta studio when I was 15. Video

Keene Brothers “Death Of The Party”
Wieslander: Razorsharp jingle-jangle power-pop perfection. I’ve always thought Robert Pollard is at the top of his game when collaborating. Preferably with Doug Gillard! This time, Tommy Keene helps him take it to the next level. I will never tire of this. Video

Yazoo “Too Pieces”
Wieslander: With subtle touches of Abba melancholy, this is a benchmark in making stripped down, heartfelt synth pop. As fresh now as when I first heard it as a 12-year old. Yazoo is part of the Blind Lake constitution. And the kids love them! Video

Amy Correia “Fallen Out Of Love”
Wenglén: I love the lyrics, Amy’s voice and the whole sound of the song. Her songs are like short novels or movies. Video

Kirsty MacColl “A New England”
Wieslander: In the words of Johnny Marr, “She was a fucking Jedi at harmony.” In 2000, she was killed in an accident, 41 years old. I’d like to believe her soul has touched the likes of Neko Case and Star’s Amy Millan; they’ve got some of that “Kirstyness.” Which, I guess, means brilliant, funny and tough, with tons of integrity. Anyway, this is truly beautiful and insanely catchy. Written by Billy Bragg, he added more words to this version, as Kirsty thought the original was too short. Nowadays, he performs the Kirsty version live. Bless him. And her. Video

Wilco “The Lonely 1″
Wenglén: At the time, this was the most beautiful song I’d ever heard. Jeff Tweedy at his best, and the song itself is so touching in its simplicity. Video

Residents “You Yesyesyes”
Wieslander: The sound of your rabid grandmother force-feeding you cookies. With the amazing Snakefinger on guitar and an excellent sax-riff. I fell in love with the Residents (or, the idea of them) and NRBQ (thinking they were the same band) around the peak of my Duran Duran fan-dom. Those were confusing and interesting times. Video

Pretenders “Don’t Get Me Wrong”
Wenglén: This song gets me going every time. “Happiness in a can” type of thing. I just have to pour it down and dance every time I hear it. Video

Herbie Hancock “Spank-A-Lee”
Wieslander: Is it possible to be this funky? Does Mr. Hancock have alien DNA? I’ve seen dead fish shake ass to this. There should be statues of Herbie Hancock in every town. Video

Roxy Music “Avalon”
Wenglén: As a kid, me and my friend Thomas spent hours and hours lying on a Persian rug, listening to this god-like song. The chorus is untouchable. As is Bryan Ferry. Video