When the folks in Spirit Family Reunion raise their voices in song, they deliver an inspiring message. Their mostly acoustic approach combines elements of rock with hints of bluegrass and country music. They have a feel that approaches the fervent emotions of gospel music, but their messages stay grounded in the secular world. Banjo player Maggie Carson will be guest editing magnetmagazine.com all week. Read our new feature on the band 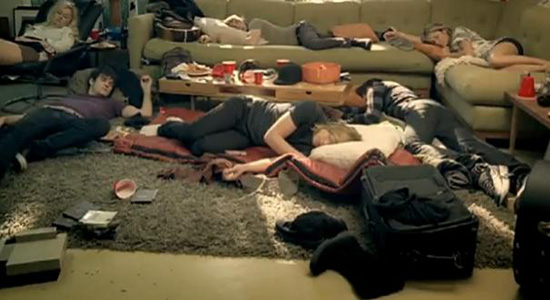 Carson: One of the greatest experiences for a band on tour is getting to stay with an awesome host. People who go out to see live music and offer to put the band up are a special kind of people.

When we first started to tour we always found a place to stay, never a hotel. We wound up sleeping in some rough spots, but we always got a sense of where we were, and we made some friends who we still hold dear. Nowadays, we’ll sometimes wind up in a hotel, and when you’re there you could be anywhere. You get a hot shower and a place to lay, but you don’t get to know someone who was inspired by your music. You don’t get the good breakfast-spot recommendation. You don’t get to make a friend you can visit the next time through.

You can tell when someone has done it before—either hosting or touring. There’s mention of clean towels. There’s a late-night hang with some good records and a round of drinks, or a good hot cup of tea and “see you in the morning.” There’s a few couches, some air mattresses, maybe an empty bed or two, or just lots of blankets on the carpet. Wake up and make a big breakfast, or “I gotta leave at seven but stay as long as you want just shut the door behind you.” You’re in a strange condition when you’re on tour and you can tell when somebody gets it, and when somebody gets it, it means a lot.

It’s easy to feel unworthy of such warm hospitality. But it’s nice to trust that anyone who makes this offering feels that it’s an even exchange. It’s good to know that someone connects with what you’ve given through your music, and they just want to give back to complete that connection. We are so lucky that we sometimes get to deal in this kind of trade based on experience rather than dollars. That’s the way we should be interacting with all people who we don’t know but we’re too frightened. Something about music seems to break this wall down and bring out the generosity in people. No heavy hotel curtains or “Do Not Disturb” signs can beat the experience of a new friend’s generous hospitality. Here’s to appreciating all the great band hosts out there.