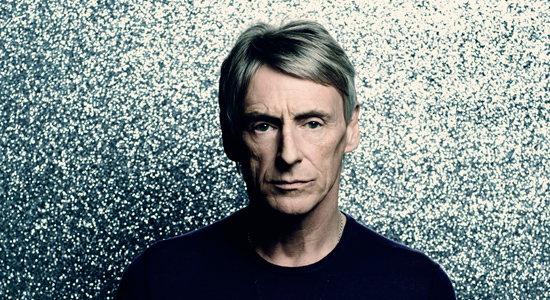 While he remains, at best, a cult hero on this side of the pond, back home in Britain, Paul Weller has achieved near mythic status. He’s the Modfather, the man who gained cultural and chart domination with the Jam, only to disband the group at its commercial peak. Then, in a career move that, at the time, seemed almost willfully perverse, he set sail with the Style Council, apparently hell-bent on alienating a sizeable core of his (largely straight and very male) audience, flirting with Galoises-scented Gallic chic, jazz-funk-flavored Socialist agit-pop and some unintentionally comic, homoerotic videos.

Not satisfied with actively traumatizing many of his loyal followers, he then decides to reinvent the group as Acid House adventurers (about three years too early), and is unceremoniously dumped by the record company, only to reemerge as the blue-eyed soul revivalist who goes on to attain utter chart domination once more, becoming a figure so ubiquitous as to become part of the furniture. To the extent that he’s become that most British of institutions: a “national treasure,” a dubious accolade usually afforded to the likes of elderly politicians, aging soap stars and sundry veterans of light entertainment. Not that he’d thank you for it …

“Do I feel like what?” he splutters down the line from London. “Do I feel like a national treasure? Nah, fuck that, man. It just makes me realize how fuckin’ old I am, d’youknowwhatImean?”

He’s here to talk about his new album, the thoroughly splendid Saturn’s Pattern. As befits Weller’s more recent work, it’s a restless, eclectic record that pushes out in multiple directions at once, never content to settle into one well-worn groove. It’s a big, bold, brassy effort, all needle-in-the-red production, with demented gonzoid blues, sinewy Meters-style funk, filthy Stooges-style riffs, kaleidoscopic soul, lysergic-drenched jazz and all points in between. It is, in short, a long way from the myopic “dad rock” that he patented back in the mid-’90s, a formula that lead to huge commercial success, but ultimately diminishing artistic returns.

It will be interesting to see how his legions of middle-aged Fred Perry-clad fans deal with this latest creative U-turn. That said, Saturn’s Pattern seems very much in keeping with Weller’s last three willfully eclectic, critically lauded albums: Sonik Kicks, Wake Up The Nation and 22 Dreams. It would appear he’s gone through some creative midlife crisis that, conversely, has poured forth some of the best music of his lengthy career. It’s a creative purple patch that seems to show no signs of slowing down.

“Yeah, you’re right,” he says. “I suppose it is. Why? I dunno, I never really question why those things are—they just are. I think what it is, right, is that I made 22 Dreams a few years back, and it made me get into more experimental recording and writing methods. It just made me readjust everything and change it up, if only to make everything more interesting for me, really. So, maybe that has a lot to do with it, but I try not to question it too much, man. I just pick up the ball and run with it as much as I can, ’cause you don’t really know what’s going to happen or how long it’s going to last.”

What remains so heartening about Saturn’s Pattern and Weller’s creative resurgence is that it seems to have heralded the return of the adventurous Weller of old, the restlessly creative contrarian, as opposed to the dull-yet-worthy craftsman—the Weller who had no apparent qualms about alienating fellow musicians or fans, whether it was disbanding the Jam or heading off on a tangent with the Style Council.

“Well, you’re always going to upset someone, ain’t you?” he says. “Whatever changes or moves you make in life, I’m bound to rub someone up the wrong way. But I’ve got to remain true to myself. I don’t go out of my way to alienate people, but people have to be prepared to dig in and go with it, and some do and some don’t, and it’s as simple as that.”

An admirable sentiment, and one that’s made all the more important by the fact that Weller’s reached the stage of his career where he could have gone on simply banging out albums-by-rote, safe in the knowledge that his rabid fan base would eagerly lap up any old product. And he could, like so many of his contemporaries, keep on touring the hits. He realizes there’s a considerable chunk of his audience who’d love nothing better than for him to do than play, say, Sound Affects in its entirety. But it’s a notion that leaves Weller at best cold, if not faintly appalled.

“I could do that, yeah,” he snaps, “and it would be easy, too. But I won’t, ’cause it doesn’t interest me; it would kill any enthusiasm stone dead. There would be no challenge, there would be no sense of being relative or contemporary, and that’s important to me. I don’t want to turn into some nostalgia act—that wouldn’t interest me in the slightest. I mean, other people do it and fair play to them, but I don’t fuckin’ care about it. I’m only ever interested in what I’m doing in the here and now.”