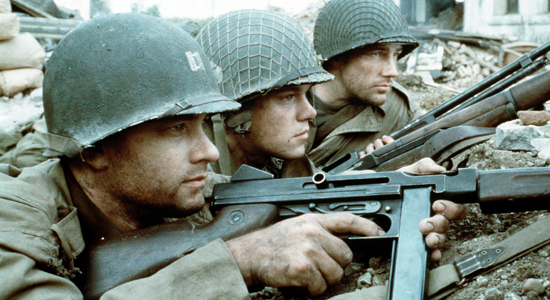 Not for the squeamish, the half-hour long opening sequence of Private Ryan, detailing the U.S. part of the invasion of Normandy by the allied forces in June of 1944, may be as close as you’ll get to the overpowering fear engendered by the original event. Hundreds of bodies with limbs or heads blown off float aimlessly like bags of straw in the lapping waters as more and more troops slog ashore desperately trying to dodge the fusillade of shells from German machine-gun nests entrenched on cement barricades built into the rocky area above the beach.

“They’ll shoot at any five men together! One man alone isn’t worth the ammo!” bellows an officer as the front gates of the LST landing craft spring open and the men in front are cut to pieces before they can even stand. Captain John Miller (Tom Hanks in his best screen performance ever) drags one of his injured boys about five steps up the beach before looking back and realizing it’s only half of the soldier. One man takes a direct hit to the steel helmet on this head. He removes it briefly to admire the dent and is drilled by a second round in the middle of his forehead. Miller hollers for the bangalores to be brought forward. The thin tubes that propel incendiary grenades at the enemy are just the ticket for finally flash-frying the machine gun outposts. Others are likewise soon blown to kingdom come.

In the aftermath of all five of the Sullivan brothers from Waterloo, Iowa, perishing after the sinking of the cruiser USS Juneau by the Japanese in 1942, the armed forces have made a sincere effort to see that this should never again happen to one family. Since three of the Ryan brothers have just died during the invasion at Omaha Beach on D-Day, General George C. Marshall is determined to find the fourth brother, a paratrooper who’s landed behind enemy lines in France and is now missing, and send him home immediately.

A hand-picked group of eight elite American Ranger survivors, led by Captain Miller, are directed to venture deep behind German lines, and somehow locate PFC James Ryan (Matt Damon) and bring him back home. After the pure butchery of the 24 hours spent landing on Omaha beach, finding this kid ought to be a snap, reckons the battle-tested outfit. It isn’t.