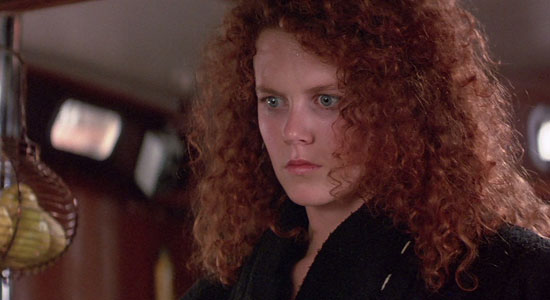 This early look at Nicole Kidman, 10 years before Eyes Wide Shut, is an Australian thriller that co-stars New Zealand-raised Sam Neill (of Jurassic Park and TV’s Reilly, Ace Of Spies). Oddly enough, the simple plot is a dead-ringer for one used in Laurel & Hardy’s last great comedy, 1940’s Saps At Sea. Needless to say, no one in the Aussie picture is motivated to stand up to a belligerent stowaway by imploring his pal to play the trombone.

John Ingram (Neill), a captain in the Australian Navy, eagerly returns home for the Christmas holidays to find his wife, Rae (Kidman), in the hospital with life-threatening injuries after a car crash that has killed their young son. To begin the mending process from this tragedy, he suggests they take a lengthy vacation aboard their handsome yacht, just the two of them, drifting aimlessly in the Pacific Ocean off the Great Barrier Reef, heading slowly toward the middle of nowhere.

Everything changes one morning when the Ingrams spy another ship, a three-masted schooner, that has drifted into sight during the night. Someone from this mysterious vessel is rowing its dinghy as fast as he can toward them. The frantic man, shirtless and out of his mind with fear, stumbles aboard the Ingram’s boat, spewing a bizarre tale of what’s just happened aboard the mysterious craft. All four of his female passengers have died a horrible death from food poisoning, and his ship, rented for a pleasure trip, is now rapidly taking on water, so he claims.

The Ingrams put the delirious man, who calls himself Hughie Warriner (American actor Billy Zane), to bed. But John, with a naval veteran’s sense of something being amiss, decides to row over to the other boat to investigate this bizarre tale. When he arrives, he finds four female corpses, all brutally mangled by the man now comfortably resting below-deck aboard his yacht. Warriner was right on one count, Ingram finds: His craft is definitely taking on water. Scared out of his wits, he rows fast as he can, back toward his boat—but he’s too late.

Warriner, now wide awake, has busted free from his locked quarters below deck and delivered a vicious haymaker to Rae, knocking her senseless. Ingram arrives just a fraction too late to save his wife, as Warriner has already fired up the engines to escape. Ingram makes one desperate leap toward his boat, but bounces helplessly off the side and back into the sea, as his yacht vanishes into the distance. The distraught husband has only one recourse in an attempt to save his wife: to row back to the ghost ship with its grisly contents and follow the runaway madman in a ship that certainly won’t make the distance before it heads toward Davy Jones’ locker.